Tuesday saw more gains for stocks in general and three of the four main indices moved higher as a result. The Dow lost 0.38% and was the lone index in the red as it was weighed down by Boeing once again. The Nasdaq led the way with a gain of 0.44% and it was followed by the S&P which tacked on 0.30%. The Russell saw most of its gains disappear in the afternoon, but did hang on to a small gain of 0.06%.

There were eight sectors that moved higher on Tuesday while one fell and one finished unchanged. The consumer staples sector was the unchanged one while the industrial sector dropped 0.84% on the day. It was also taken down by Boeing.

[hana-code-insert name=’adsense-article’ /]As for the sectors that gained on the day, the healthcare sector jumped by 0.72% and that was good enough to finish as the top gainer.

The utilities sector gained 0.66% and the energy sector tacked on 0.62% as the second and third best performers.

My scans made it three straight nights of positively skewed results on Tuesday with 82 names on the bullish list and only two on the bearish list.

The barometer jumped from 50.3 to 71.9 once those numbers were added.

That is the highest number since the huge numbers we were seeing at the end of December when there were so many stocks in oversold territory.

Once again there was an abundance of bullish signals to choose from and a limited number of bearish signals, so I have another bullish idea today. Interpublic Group of Companies (NYSE: IPG) was on the bullish list and the company scores a 92 on IBD’s EPS rating system and a B on their SMR rating. 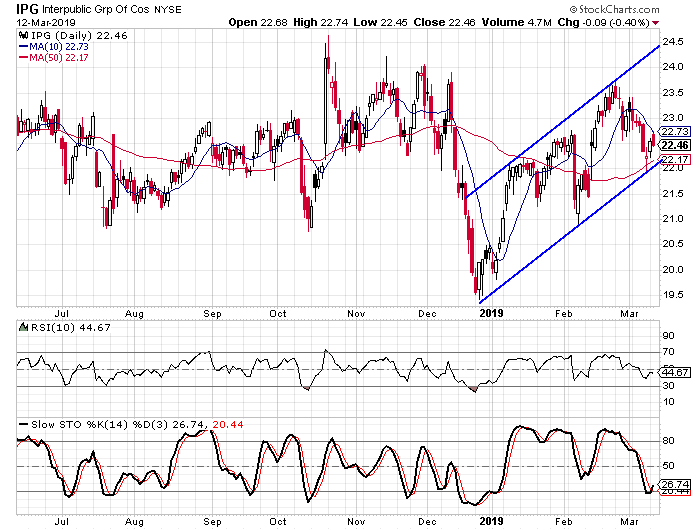 Since its low in December, IPG has formed a trend channel and the stock just hit the lower rail. The stock bounced a little on Monday and then dropped a little on Tuesday, but we still saw the stochastic readings make a bullish crossover and the stock remains above its 50-day moving average.