After five straight days of selling pressure, Monday saw some buying pressure enter the market and all four sectors moved higher as a result. The Nasdaq led the way with a gain of 2.02% and it was followed by the Russell with a gain of 1.61% while the S&P tacked on 1.47%. The Dow lagged the others but still managed a gain of 0.79%. The Dow was hurt by Boeing dropping 5.36% after the plane crash in Ethiopia over the weekend.

[hana-code-insert name=’adsense-article’ /]All ten sectors moved higher on Monday with all but two sectors gaining more than one percent.

The communication services sector notched a gain of 1.78% as the second best performer and the energy sector added 1.56% for third place.

My scans produced bullishly skewed results for a second straight night on Monday.

There were 127 bullish signals and only one bearish signal.

The barometer jumped to 50.3 from -2.9 once these results were added in to the equation. That is the highest reading for the barometer since December 28.

Obviously with 127 names to choose from on the bullish list and only one on the bearish side, today’s trade idea is a bullish one. Splunk (Nasdaq: SPLK) is a software company and it scores a 96 on the EPS rating and an A on the SMR rating. The company has seen earnings grow by an average of 110% per year over the last three years while sales have grown at a rate of 38% per year. 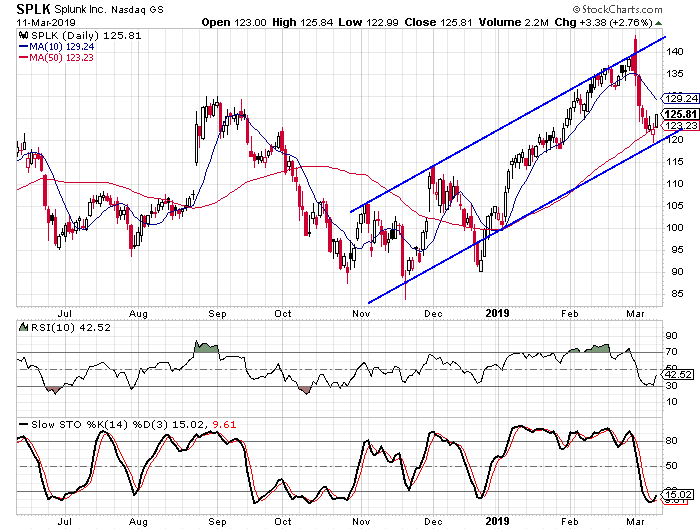 The daily chart shows how the stock has been trending higher since November and a trend channel has formed during the last four months. The stock just bounced off of the lower rail and it appears to have a secondary layer of support from its 50-day moving average.