The selling pressure that hit the market on Wednesday decided to stick around on Thursday. We saw all four of the main indices lose ground again and this time the losses were worse for all except the Russell. The Nasdaq got hit the hardest yesterday with a drop of 1.13%. The Russell took the second worst loss at 0.83 % after falling more than two percent on Wednesday. The S&P fell 0.81% and the Dow dropped 0.78%.

Nine sectors lost ground on the day with the utilities sector gaining 0.35% as the only one spared from the losses.

[hana-code-insert name=’adsense-article’ /]The consumer discretionary sector suffered the worst loss on Thursday at 1.21% and the financial sector fell 1.07%.

Those were the only two sectors with losses greater than one percent.

Not surprisingly, the scans produced another night of negatively skewed results.

The barometer didn’t change after these results were added in to the equation.

The reading came in at -16.9 for the second straight night.

Today’s trade idea is another bearish one and this time it is on the iShares MSCI China ETF (Nasdaq: MCHI). China’s economy is weakening and the government is taking measures to try to curb the slowdown. Unfortunately the measures aren’t going to take effect immediately so the market may continue to fall—as it has done for the last couple of days. 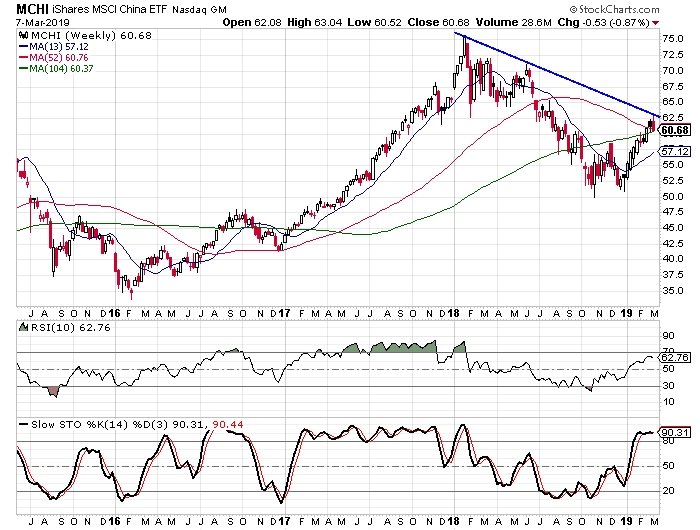 I chose to show you the weekly chart for the MCHI because it tells more of the story than the daily chart. We see that by connecting the highs from last January and June we get a downward sloped trend line. The fund just hit the trend line before turning lower. The area is also the site of the 52-week and 104-week moving averages.