Stocks saw some selling pressure hit on Wednesday with all four indices seeing significant losses. The Russell took the worst hit with a decline of 2.01%. The Nasdaq dropped 0.93% and the S&P fell 0.65%. The Dow held up the best of the four, but still lost 0.52% on the day.

Eight of the 10 main sectors fell on Wednesday with one breaking even—the utilities sector. The materials sector was the lone sector in the black on the day with a gain of 0.22%.

[hana-code-insert name=’adsense-article’ /]The healthcare sector suffered the worst loss at 1.46% and it was followed by the energy sector with a loss of 1.27%.

Those were the only two sectors that lost over one percent.

That marks 15 straight nights with more bearish signals than bullish ones.

The barometer dropped from -14.1 to -16.9 once these results were added in to the equation.

Today’s trade idea is another bearish one and it is on Western Union (NYSE: WU). The company’s fundamental ratings aren’t bad, but the chart outweighs the fundamentals over the short term. The company scores 64 on Investor’s Business Daily’s EPS rating system and it scores a B in the SMR ratings. 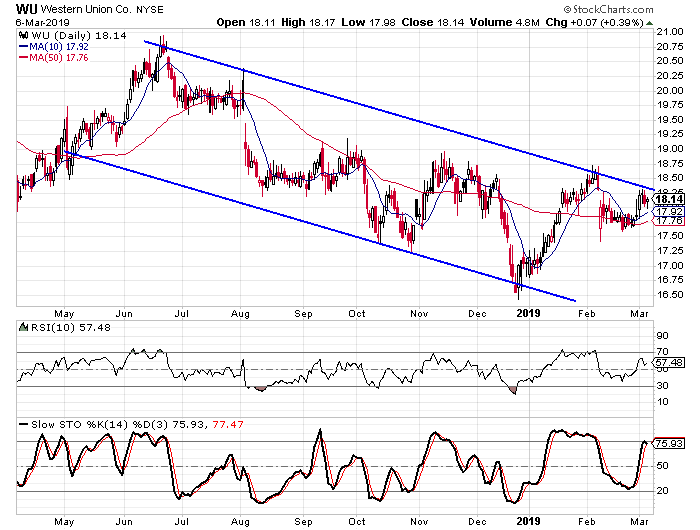 The chart shows that the stock has been trending lower since last June and a downward sloped trend channel has formed. The stock is hitting the upper rail of the channel at this time. The stochastic readings just touched overbought territory and made a bearish crossover yesterday.