Trading on Tuesday didn’t show much conviction in either direction, leaving the indices to meander back and forth between positive territory and negative territory several times throughout the day. At the end of the day though, all four wound up in negative territory. The losses were minimal with the Russell suffering the worst loss at 0.35%. The S&P fell 0.11%, the Dow lost 0.05%, and the Nasdaq dropped 0.02%.

The sector performance was surprising once again as there were eight that finished with losses and only two that gained ground. With the performances of the indices, I expected the sectors to be more balanced. As for the performances, the communication services sector led the way with a gain of 0.60% and it was followed by the consumer discretionary sector with a gain of 0.25%.

[hana-code-insert name=’adsense-article’ /]The worst performance came from the industrial sector which declined by 0.66%.

The materials sector dropped 0.47% as the second worst performer and it was followed by the energy sector which lost 0.32%.

Once again my scans produced more bearish signals than bullish signals last night with 17 names on the bullish list and 23 on the bearish list.

I looked back at the past few months and the bearish signals have outnumbered the bullish ones in 37 of the last 38 days.

The barometer did move up a little as the difference between the two lists was only six last night. The final reading was -14.1 on Tuesday, up from -19.7 on Monday.

After three straight bearish trade ideas, I have a bullish one for you today. This time it is on the Direxion Daily Gold Miners Index Bull 3x Shares (NYSE: NUGT). This is a leveraged bullish ETF on gold miners, so it is a more aggressive trade idea than usual. 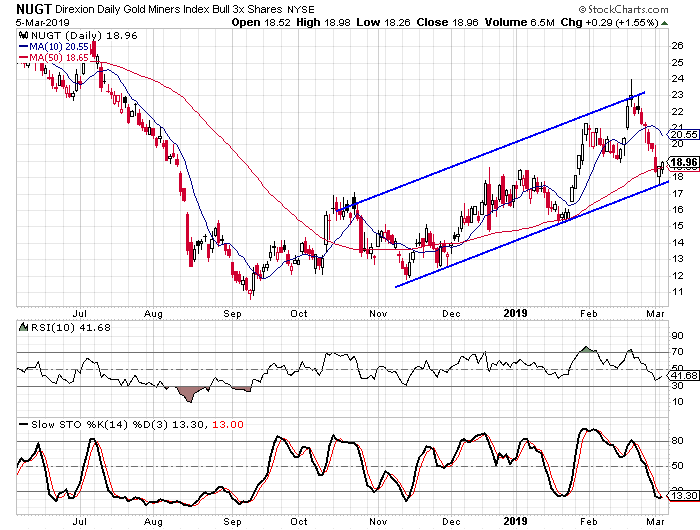 We see on the chart that the ETF has been trending higher since November and a trend channel has formed during that period. The fund is hitting the lower rail of the channel and the daily stochastic readings are in oversold territory. They stochastic readings did make a bullish crossover yesterday and this is a similar scenario to what we saw in mid-January when the fund jumped over 37% in only seven trading days.

Buy to open the April $17-strike calls on NUGT at $3.00 or better. These options expire on April 18. The options will double if the fund hits $23. The fund won’t have to break through the recent high and it won’t be at the upper rail and these options can still double. I suggest a target gain of 100% with a stop at $17.50.