The market got hit with some selling pressure on Monday and the Russell took the worst hit with a loss of 0.94%. The Dow was the second worst performer with a drop of 0.79% and the S&P lost 0.39%. The Nasdaq took the smallest hit, but still fell 0.23%. All four opened higher, but the tone shifted in the morning and by the lunch hour all of them were in negative territory.

The sector performance wasn’t as bad as I expected with four sectors moving higher and six moving lower. The materials sector led the way with a gain of 0.45% and it was followed by the utilities sector with a gain of 0.19%.

[hana-code-insert name=’adsense-article’ /]The healthcare sector took the worst hit with a decline of 1.33% and that was by far the worst performance of the 10 groups.

The second worst performance came from the financial sector with a drop of 0.60%.

My scans continued to produce more bearish signals than bullish ones and the negativity gained a little ground on Monday.

The barometer dipped slightly from -18.3 to -19.7, but it had been moving up for five straight days prior to Monday.

With the market getting hit with its first significant selling in quite some time, I felt it was prudent to issue a third straight bearish trade idea. It also helped that there were three times as many stocks to choose from on the bearish list. The subject of today’s trade idea is Fossil Group (Nasdaq: FOSL). The company scores a 70 on the EPS rating which is above average, but it scores an E on the SMR rating and that is the worst rating a stock can get. 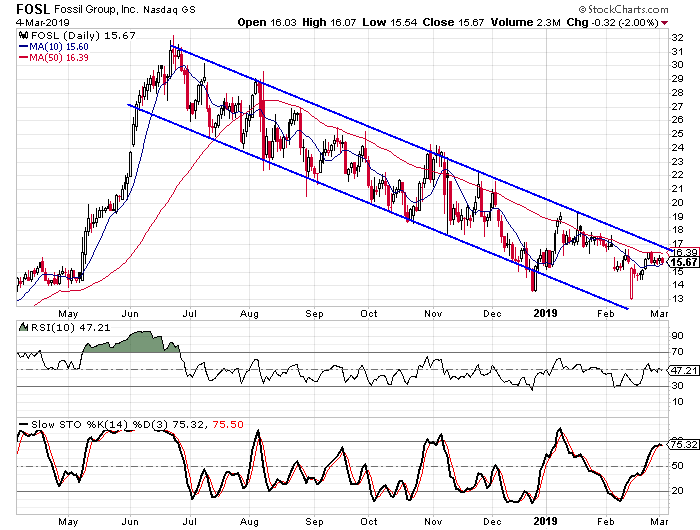 Fossil has been trending lower since June of last year and a trend channel has formed to define the various cycles within the overall trend. The stock is close to the upper rail of the channel currently and it is hitting its 50-day moving average. We also see that the daily stochastic readings are hitting overbought territory just as they did in August, November and January- all points where the stock was hitting the upper rail.

Buy to open the April $16-strike puts on FOSL at $1.60 or better. These options expire on April 18. The options will double if the stock drops to $12.80. This means the stock will have to drop below the level it hit in mid-February, but it won’t have to make it all the way down to the bottom rail of the channel. I suggest a target gain of 100% with a stop at $16.25.