Friday saw some buying pressure move back in to the market and all four of the major indices moved higher as a result. The Russell led the way with a gain of 0.89% and it was followed closely by the Nasdaq with a gain of 0.83%. The S&P tacked on 0.69% and the Dow lagged the other three but still notched a gain of 0.43%.

[hana-code-insert name=’adsense-article’ /]The consumer staples sector was the worst performer on the day with a decline of 0.18% and it was joined in negative territory by the materials sector with a loss of 0.13%.

My scans registered another negative total with 16 bearish signals and nine bullish signals.

That is the 12 straight readings in negative territory for the scans.

The barometer continued to climb due to the smaller differentials of late and it moved up to -18.3 from -28 in Friday.

Combing through the bullish and bearish lists from Friday, there were only a few charts that stood out to me.

The one that stood out the most was Morgan Stanley (NYSE: MS). The company doesn’t have terrible fundamentals with an EPS rating of 75 and an SMR rating of a B, but the chart is what sold me on the trade. 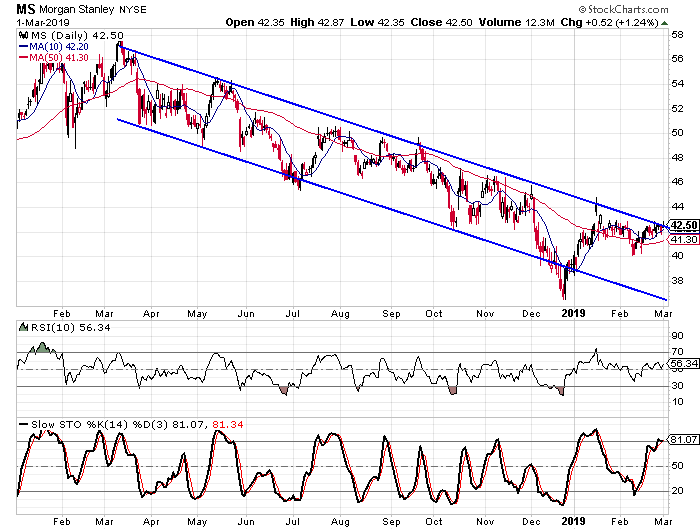 We see that Morgan Stanley has been trending lower for the past year and a trend channel has formed to define the various cycles within the overall trend. The stock hit the upper rail of the channel this past week and looks primed for the next leg lower.