Thursday seemed like a replay of Tuesday with stocks not moving too far from the breakeven point on the day. All four of the main indices did end up with losses, but they were modest losses.

[hana-code-insert name=’adsense-article’ /]The action was a little surprising given that the initial look at fourth quarter GDP was better than expected.

The worst performing sector was the materials sector which lost 1.24% and it was followed by the energy sector with a loss of 0.99%.

Those two losses were substantially greater than the other sectors.

My scans produced 49 bearish signals and 12 bullish signals last night and that caused the barometer to move up to -28 from -29.5.

With the market meandering for the last few days, I seem to be doing the same as I have alternated back and forth between bullish and bearish trade ideas. Today’s is a bearish one on Sony Corp. (NYSE: SNE). The company scores a 30 on its EPS rating and a C in the SMR category. 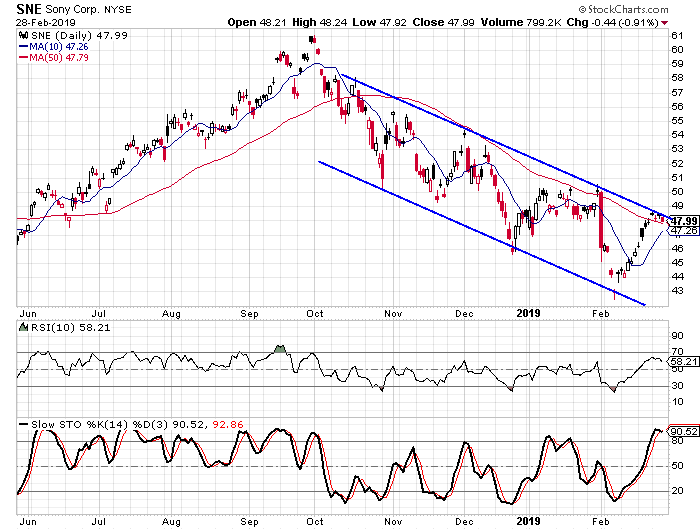 Sony has been trending lower since last September and a downward sloped trend channel has formed over the last five months. The stock just hit the upper rail of the channel and that rail is just above the 50-day moving average. We also see that the stochastic readings are in overbought territory and just made a bearish crossover.