The sectors were mixed again with four moving higher and six moving lower. The communication services sector was the worst performer with a loss of 0.5% and it was followed by the healthcare sector with a loss of 0.47%.

[hana-code-insert name=’adsense-article’ /]There was a tie between financials and industrials for the best performance on Wednesday with each sector notching a gain of 0.38%.

My scans produced a tenth straight night of bearishly skewed results on Wednesday with 27 names on the bearish side and 13 on the bullish side.

The barometer continues to inch back up as the difference between the two lists has grown smaller.

Today’s trade idea is another bullish one and it is on Owens Corning (NYSE: OC). The building materials company scores a 91 on Investor’s Business Daily’s EPS rating system and it scores a B on the SMR rating system. 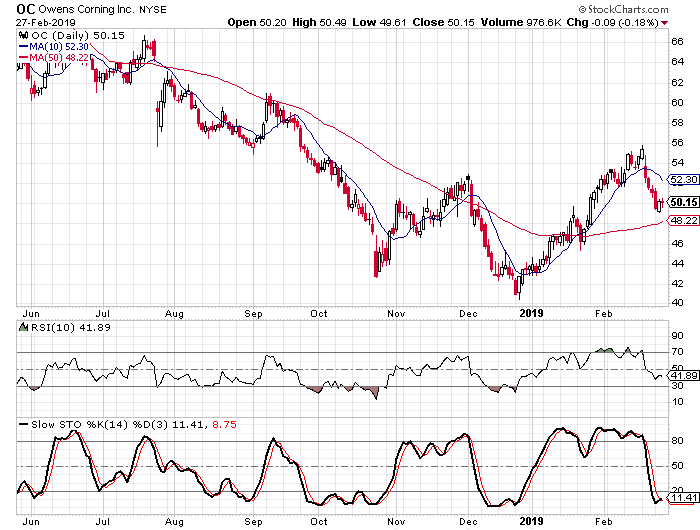 The thing that got my attention more than anything about Owens Corning was how the stock was finally able to move well above its 50-day moving average in the middle of the month. The stock was able to move above on several occasions as it was declining last year, but could never move more than a few percentage points above it. Now it dipped back down close to the trend line, but looks like it is ready to resume the upward trend it started in December.