Stocks seemed to meander aimlessly on Tuesday and didn’t move much above breakeven or much below it. There was a slight downturn at the end of the day and all four of the indices ended up in negative territory. The Russell suffered the worst loss at 0.45% and the Dow had the second worst loss at 0.13%. The S&P slipped 0.08% and the Nasdaq suffered the smallest loss at 0.07%.

The sectors were mixed on the day with six moving lower, three moving higher, and the communication services sector finished unchanged.

[hana-code-insert name=’adsense-article’ /]The materials sector was the worst performer on the day with a drop of 0.59%.

The healthcare sector was the second worst performer with a loss of 0.35%.

Of the three in positive territory, the tech sector finished with the biggest gain at 0.2% and the consumer discretionary sector edged up by 0.13% as the second best performer.

The consumer staples sector notched a gain of 0.06% as the third sector in positive territory.

My scans slowed their negative run slightly on Tuesday.

The differential of -16 is the smallest negative number since February 14.

The barometer moved up from -71.9 to -49.8 once the results were added in to the equation.

After a break in the bearish trade ideas yesterday, I have another bearish one for you today. Today’s trade idea is on Juniper Networks (NYSE: JNPR). The company’s fundamental ratings are average with an EPS rating of 56 and an SMR rating of a C. Both earnings and sales have been declining for the last three years. 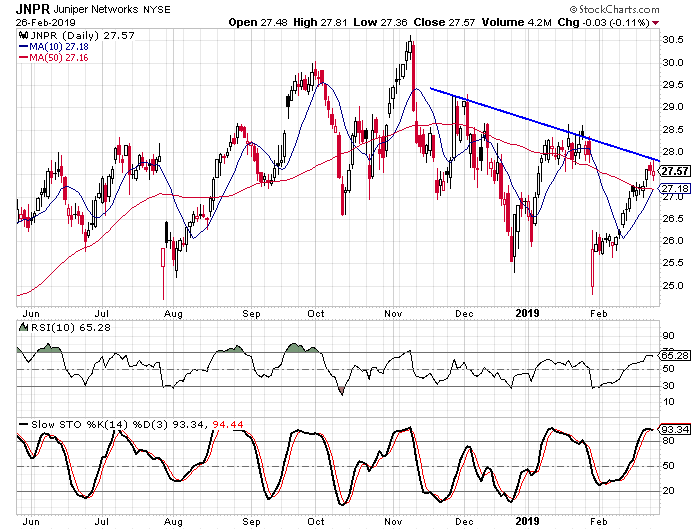 We see on the chart that the stock just hit a downward sloped trend line that connects the closing highs from November and January. The company disappointed with its earnings report on January 29 and that is what caused the gap lower. The stock has moved sharply higher since the disappointing earnings results and is now overbought, but the stochastic readings just made a bearish crossover.