For the most part, Monday brought more buying pressure to the market, but things didn’t finish as well as they started. Three of the four main indices closed higher on the day with the Russell losing 0.08% as the only one to finish in the red.

The Nasdaq led the way with a gain of 0.36% while the Dow logged a gain of 0.23%. The S&P tacked on 0.12%, but all four indices gapped higher and were posting much higher gains in the morning. All four closed at or near their lows of the day.

[hana-code-insert name=’adsense-article’ /]Seven of the sectors moved higher on Monday with the materials sector leading the way with a gain of 0.65%.

The tech sector was the second best performer and it added on 0.48%.

The buying was fueled by President Trump’s announcement over the weekend that he would delay the tariffs on Chinese goods that were set to start on Friday.

The utilities sector was the worst performer with a drop of 0.65%.

It was followed by the consumer staples sector with a decline of 0.55% and the consumer discretionary sector joined those two in negative territory with a loss of 0.33%.

For the eighth straight night my scans were bearishly skewed and for the sixth straight the differential was significant. There were 62 names on the bearish list and four on the bullish list on Monday night.

Despite the overwhelming number of stocks on the bearish list, today’s trade idea is a bullish one after five straight bearish ones. The company is Exelixis (Nasdaq: EXEL) and it has an EPS rating of 71 and an SMR rating of an A. 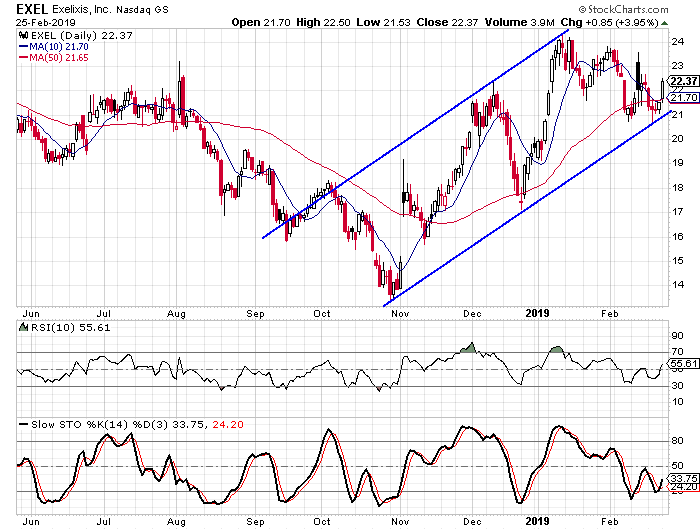 Exelixis has been moving sharply higher since the end of October and a trend channel has formed as a result. The lower rail was formed by the low in October and the low in December. The stock just hit the lower rail again and turned higher in the last few days. I look for another bounce out of the stock.