Friday saw another round of buying hit the market and all four indices advanced as a result. The Russell led the way with a gain of 0.92% and it was followed by the Nasdaq with a gain of 0.91%. The Dow notched a gain of 0.70% and the S&P lagged the others but still tacked on 0.64%. For the Dow, Nasdaq, and Russell, they have all experienced nine-week winning streaks.

Eight of the ten main sectors moved up on Friday. The tech sector led the way with a gain of 1.28% and it was the only one that gained over one percent.

[hana-code-insert name=’adsense-article’ /]The communication services sector gained 0.94% and the healthcare sector was up 0.92% as the second and third best performing groups.

The consumer staples sector was the worst performer with a loss of 0.48% and the big drop in Kraft Heinz contributed to that loss.

The financial sector was the other sector in the red with a loss of 0.19%.

My scans continued to produce more bearish signals than bullish ones on Friday with the final tally being 82 names on the bearish list and seven on the bullish list.

The barometer fell from -68.8 to -75.3 once these results were added in to the calculation.

There was one name on the bullish list that I liked, but the pricing of the options made was such that I didn’t like the risk/reward relationship. That stock was Lululemon. As for the trade idea of the day, it is another bearish one and this time it is on the iShares MSCI EAFE ETF (NYSE: EFA). We have played the ETF successfully several times before. 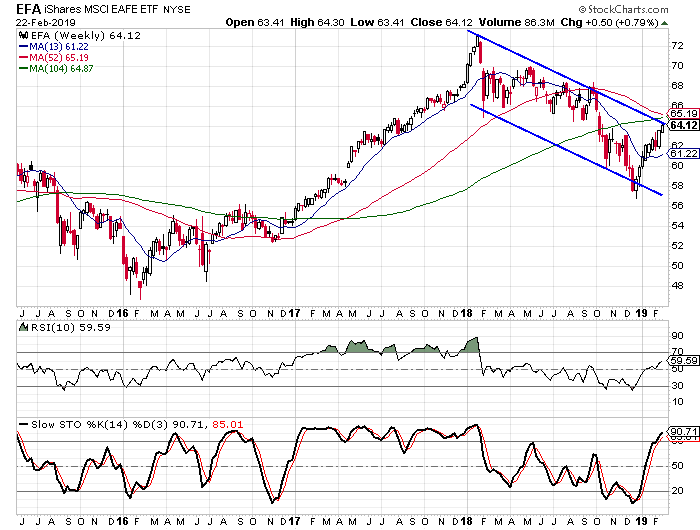 We see on the weekly chart a similar pattern to what we saw on the EWU on Friday. The stock has seen a trend channel form over the past year and the fund is right at the upper rail of the channel. We also see that the 52-week and 104-week moving averages are converging in the $65 area.