There was a bearish tone to Thursday’s trading and all four of the main indices dropped as a result. The losses were pretty tightly bunched from a percentage standpoint. The Dow suffered the biggest loss at 0.40%. The Russell and Nasdaq both dropped 0.39% and the S&P lost the least at 0.35%.

The sectors flipped yesterday compared to Wednesday with seven moving down and three moving higher. The energy sector suffered the biggest decline at 1.55% and it was followed by the communication services sector with a loss of 0.93%.

[hana-code-insert name=’adsense-article’ /]On the positive side, the utilities sector gained 0.73% to lead the way and it was joined in positive territory by the consumer staples sector (+0.29%) and the tech sector (+0.04%).

My scans turned more bearish as a result of the losses yesterday.

There were 117 bearish signals and seven on the bullish list.

The barometer dropped from -38.3 to -68.8 once these results were added to the calculation.

Today’s trade idea is yet another bearish one and it is on the iShares MSCI United Kingdom ETF (NYSE: EWU).

The British market has been rising with other world markets despite all of the turmoil of their government at this time. I wouldn’t be surprised to see other markets slide in the coming weeks, but I believe the United Kingdom is particularly vulnerable. 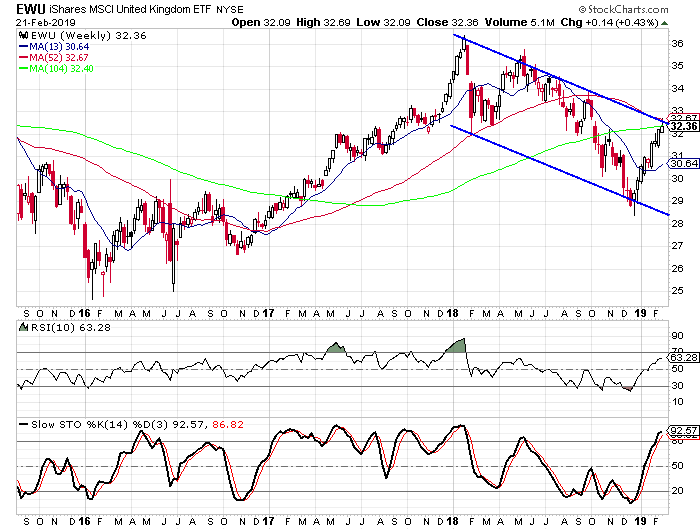 I chose the weekly chart of the EWU to show the downward trend the fund has been in over the past year. Connecting the weekly closing highs going back to last year creates the upper rail of a downward sloped channel and the fund is near that upper rail at this time.