At the end of the day on Wednesday, the four main indices were all higher, but it wasn’t as cut and dry as that. The Russell led the way with a gain of 0.42% and was never in negative territory.

On the other hand, the other three were in negative territory at various points throughout the day. The Dow finished with a gain of 0.24% and the S&P gained 0.18%. The Nasdaq lagged the others and probably spent the greatest amount of time in the red, but at the end of the day it gained 0.04%.

[hana-code-insert name=’adsense-article’ /]Seven of the sectors finished with gains and three finished in the red.

Leading the way was the materials sector with a gain of 1.71% and it was the only one with a gain over one percent.

The second best performance came from the financial sector and the gain was 0.68%.

The communication services sector had the worst performance on Wednesday with a loss of 0.35%.

The consumer staples sector (-0.18%) and the healthcare sector (-0.16%) were the other two that experienced losses.

My scans remained negatively skewed with 52 bearish signals and 10 bullish signals. This is the fifth straight night with a negative differential.

Given the greater number of bearish signals, I have a third straight bearish trade idea for you. Software provider 8×8 Inc (Nasdaq: EGHT) was on the bearish list and the company’s fundamentals are weak. The company scores a 5 on the EPS rating and a D on the SMR rating. 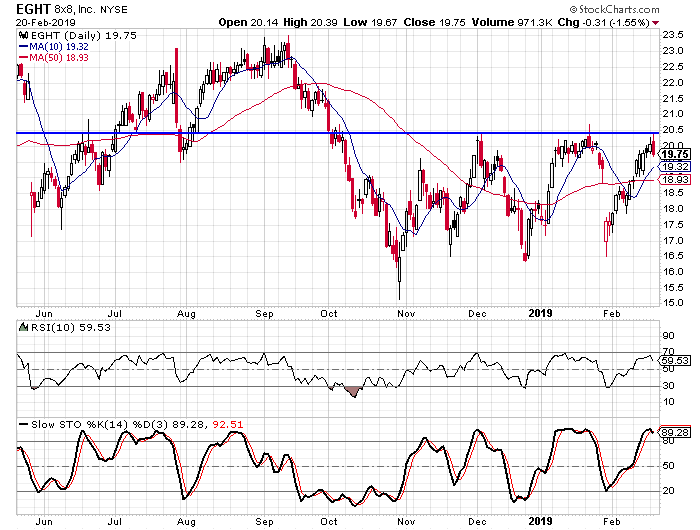 As you can see on the daily chart, the stock has had trouble at the $20.50 area on two previous occasions. The stock rallied in the last few weeks and stalled in that same area once again. The daily stochastic readings are in overbought territory and just made a bearish crossover. I look for the stock to fall once again.