All 10 of the main sectors moved higher on Friday, but there was a wide spread between the gains. The financial sector experienced the biggest gain at 2.13% and it was followed by the energy sector which tacked on 1.61%. In all there were five sectors that gained more than one percent.

[hana-code-insert name=’adsense-article’ /]The biggest laggard on the day was the utilities sector, but it gained 0.31%.

The communication services sector only gained 0.43% and that was the second smallest gain.

Even though the market moved higher on Friday, my scans produced more bearish signals on Friday than bullish ones.

The barometer fell from -0.4 to -19.2 once these results were added in to the calculation.

With the greater number of bearish stocks to choose from, the trade idea for today is a bearish one and it is on United Parcel Service (NYSE: UPS). 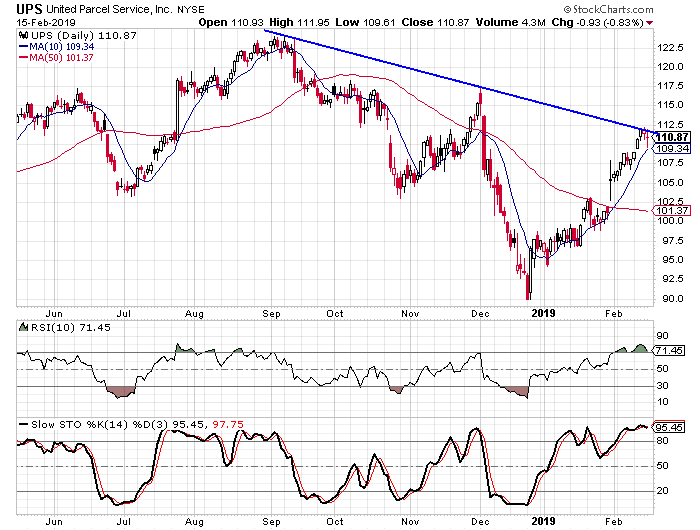 We see on the chart that the stock reached a high around $123 back in September and then around $117.50 in December. If we connect those two highs we get a downward sloped trend line that is right around $112 currently. The stock seemed to top out a little last week and it did so below the $112.50 level. The stock is overbought based on the daily stochastic readings and the 10-day RSI.