Stocks were mixed on Thursday as retail sales came in weaker than expected and PPI was below expectations. The Russell led the way with a gain of 0.14% and it was joined in positive territory by the Nasdaq with a gain of 0.09%. On the flip side, the Dow suffered a loss of 0.41% and it was joined in negative territory by the S&P with a loss of 0.27%.

Six of the 10 sectors moved lower on Thursday with the financial sector leading the way lower with a loss of 1.22%. The consumer staples sector fell by 1.14% as the second worst performer and it was the only other sector with a loss greater than one percent.

[hana-code-insert name=’adsense-article’ /]On the plus side, the communication services sector led the way with a gain of 0.37% and it was followed by the energy sector which notched a gain of 0.35%.

My scans were negative again after the one night of positive readings.

For Thursday the results showed 19 stocks on the bearish side and only nine on the bullish side.

The barometer dropped back in to negative territory after these results were added in, the final reading was -0.4.

Today’s trade idea is a bullish one on McDonalds (NYSE: MCD).

The company appeared on the bullish list and boasts an EPS rating of 73 and an SMR rating of an A. The company has seen earnings grow by 16% per year over the last three years. 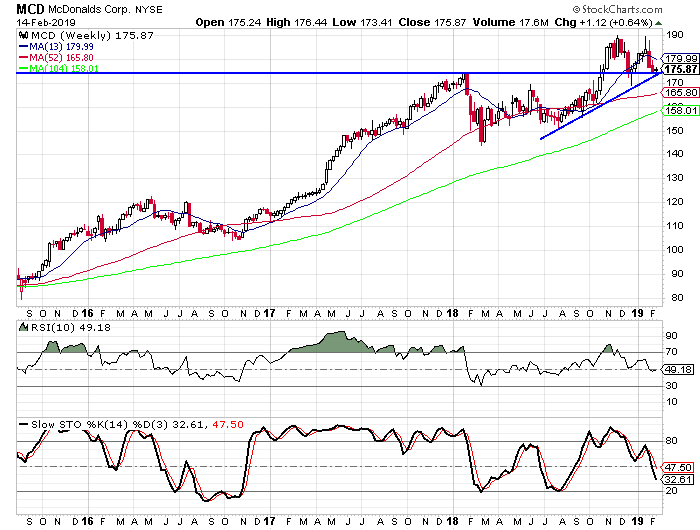 The stock has been trending higher over the last few years and it held up well in the fourth quarter selloff. A trendline connects the lows from July, September and December, and the stock just hit that trend line.