Stocks continued to trudge higher on Wednesday and all four of the main indices moved up on the day. The Dow led the way with a gain of 0.46%. The Russell and the S&P were neck and neck for second with gains of 0.31% and 0.30%, respectively. The Nasdaq lagged the other indices and only gained 0.08% on the day as it limped in to the close.

Nine of the 10 sectors moved higher on the day with the utilities sector being the lone one in the red with a loss of 0.29%. The communication services sector only gained 0.07% and the tech sector gained 0.13% and that is the reason the Nasdaq lagged the other indices.

[hana-code-insert name=’adsense-article’ /]The energy sector led the way with a gain of 1.25% and the consumer discretionary sector tacked on 0.67% to finish second.

My scans returned to their negative ways last night with 24 names on the bearish list and 15 on the bullish list.

Despite the negative daily reading from the scans, the barometer moved in to positive territory with a reading of 3.3.

That is the first positive reading since January 9.

The fundamental ratings are average to slightly above average. The EPS rating is a 50 and the SMR rating is a B, but the chart is what really got my attention. 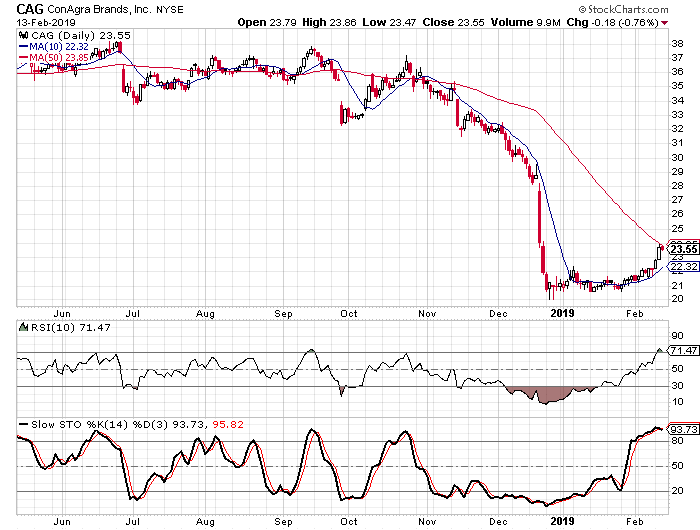 The stock dropped sharply in December, even with the overall market falling—Conagra’s drop stood out. The stock consolidated in January and has started to climb in the last few days, but now it faces resistance from its 50-day moving average.

Buy to open the April $24-strike puts on CAG at $1.50 or better. These options expire on April 18. The options will double if the stock falls to $21. The stock was below that level in December and January, so it won’t have to break to a new low for these options to double. I suggest a target gain of 100% with a stop at $24.