Monday brought little direction to the market as a whole, there didn’t seem to be much momentum in either direction. The indices experienced mixed outcomes as a result. The Russell led the way with a gain of 0.73% and it was joined in positive territory by the Nasdaq with a gain of 0.13% and the S&P with a gain of 0.07%. The Dow was the lone losing index with a loss of 0.21%.

The sectors were also mixed in terms of results with six moving higher and four moving lower. The communication services sector moved the most, but that was a down move of 1.03%. The second worst performance came from the healthcare sector with a loss of 0.14%.

My scans were as close to balanced as they could get last night, but they remained negative.

The barometer jumped from -76.9 to -45.5 once these results were added in to the equation.

The results of the bullish list last night were odd.

I found that to be a statistical anomaly and double checked to make sure it wasn’t due to one sector dominating the list—the stocks with readings between 60 and 80 came from seven different sectors.

I’m not sure what to make of it, but it definitely jumped out at me.

One stock that didn’t fall in that category is the subject of today’s trade idea. CME Group (Nasdaq: CME) was on the bullish list, but its EPS rating is 90 and the SMR rating is a B. 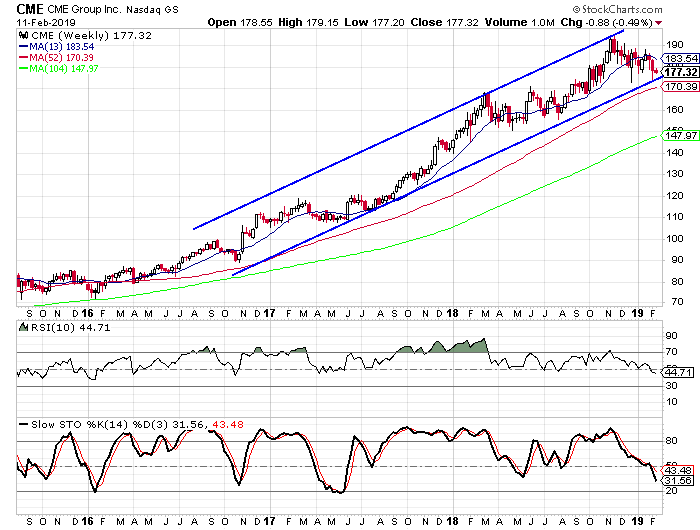 The bullish signal came from daily indicators, but it was the weekly chart that really stood out on CME. The stock has been trending higher for several years now and a trend channel has formed that defines the various waves within the overall trend. The stock just hit the lower rail of the channel it looks set to turn higher again.