Stocks moved higher on Monday and all four indices gained ground as a result. The Nasdaq led the way with a gain of 1.15% and it was followed by the Russell with a gain of 0.71%. The Dow and S&P turned in gains of 0.70% and 0.68%, respectively.

Eight of the 10 main sectors moved higher. The tech sector led the way with a gain of 1.62%. The industrial sector was the second best performer with a gain of 1.34% and it was the only other sector to gain more than one percent.

[hana-code-insert name=’adsense-article’ /]The healthcare sector was the worst performer with loss of 0.30% and the materials sector was the only other sector that lost ground, suffering a decline of 0.17%.

For those keeping track, that is the 18th straight night with a negative result.

The barometer changed very little when the results were added in, climbing to -30.1 from -30.4.

Today’s trade idea is a bearish one and the subject of the trade is Knight Swift Transportation (NYSE: KNX).

The company’s fundamental ratings aren’t that bad, but the chart suggests another leg down is due. The company scores a 77 on the EPS rating system and a B on the SMR ratings. 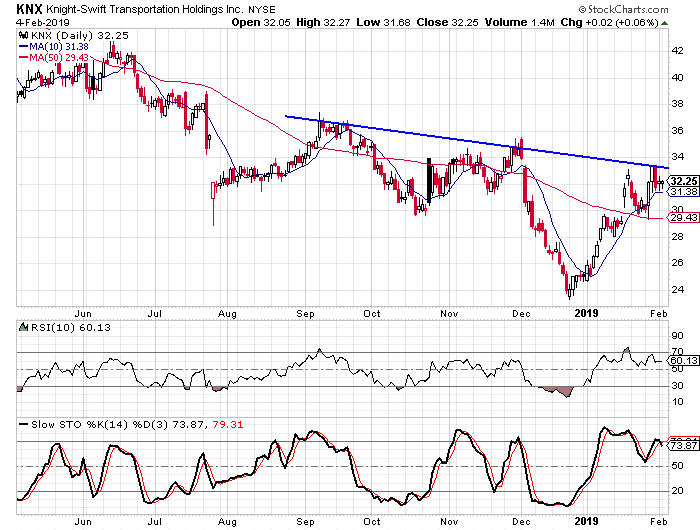 The daily chart shows how the stock gapped lower back in July and since that time the highs connect in a slight downward slope. It just hit the trendline in the last few days. The stock has been in overbought territory for quite a bit of time in the last month and the stochastic readings just dipped below the 80 level and made a bearish crossover.