The indices were mixed on Thursday with three moving higher and the Dow falling by 0.06%. The Nasdaq led the way with a gain of 1.37% and it got a boost from Facebook as the stock jumped 10.8% after better than expected earnings. The S&P notched a gain of 0.86% as the second best performer and the Russell tacked on 0.7% on the day.

Seven of the 10 main sectors moved higher on the day and there was a wide spread between the performances. The communication services sector gained an impressive 4.06% as the top performing sector and it was followed by the utilities sector with a gain of 2.11%.

[hana-code-insert name=’adsense-article’ /]Consumer staples (+1.85%) and healthcare (+1.24%) were the only other two sectors to notch gains over one percent.

My scans produced yet another round of bearish results last night with 43 names on the bearish list and nine names on the bullish side.

The stretch of negative readings has now reached 16 straight days.

Today’s trade idea is a bearish one and it is on Jeffries Financial Group (NYSE: JEF).

The asset management firm scores poorly on IBD’s fundamentals ratings, scoring a 12 in the EPS category and a D in the SMR category. The company has seen sales fall dramatically over the last three years and earnings dropped sharply in the last quarterly report. The company is scheduled to report earnings on February 20, so you will want to keep an eye on that. 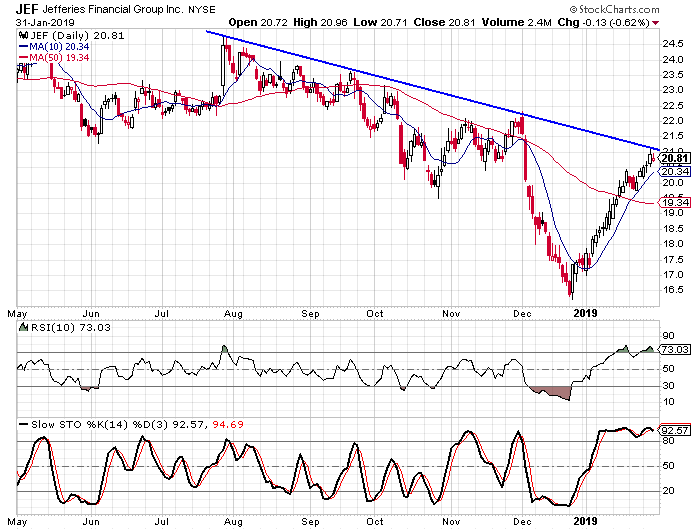 Two things jumped out at me about the chart. The first one was the trend line that connects the highs from July, September, and December and how the stock is hitting it now. The second item that jumped out was how overbought the stock is and how long it has been that way. I look for the stock to turn lower in the coming weeks.