[hana-code-insert name=’adsense-article’ /]All 10 of the main sectors moved up on the day with the tech sector leading the way by a wide margin.

The sector gained 3.11% after Apple beat its lowered forecast and EBay providing a positive earnings surprise as well.

The consumer discretionary sector was the second best performer after notching a gain of 1.97%.

In all there were seven sectors that gained over one percent.

I was a little surprised by my scans last night as there were 67 names on the bearish list and only 16 on the bullish list. The rally that started after Christmas has reached a point where the vast majority of stocks are overbought and that is preventing my scans from producing very many bullish signals.

The barometer fell from -12.1 to -26.6 once the results from Wednesday were added in to the mix.

Even with the discrepancy between the two lists, today’s trade idea is a bullish one and it is on Novo Nordisk (NYSE: NVO). The Denmark-based pharmaceutical company scores an EPS rating of 58 which is slightly above average. The SMR rating is an A and that is mainly due to the ROE of 81.2% and the profit margin of 43.6%. 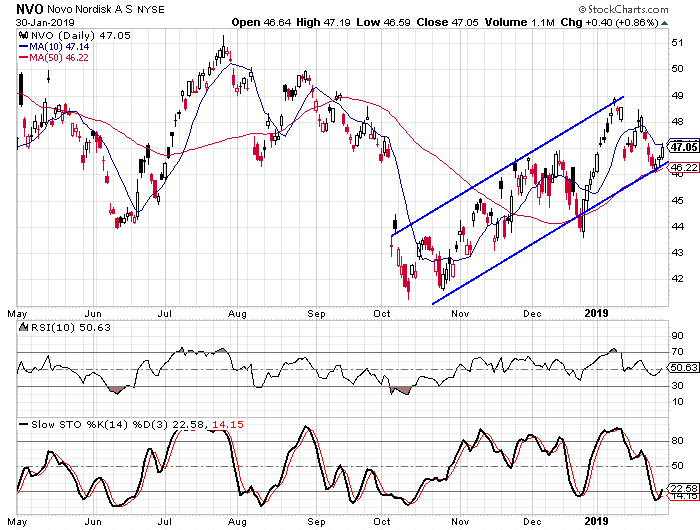 We see on the chart that the stock has formed a short-term trend channel and the stock just hit the lower rail of the channel. The daily stochastic readings were in oversold territory and are in the process of moving out of it. The indicators just made a bullish crossover and that is a similar setup to what we saw in mid-December before the stock jumped from the $44 area to the $49 area. I am looking for a similar move this time.

Buy to open the March $46-strike calls on NVO at $2.50 or better. These options expire on March 15. These options will double if the stock reaches $51 and that is also the site of the recent peak. I suggest a target gain of 100% with a stop at $45.90. I also suggest a more cautious approach on this trade idea with the impending earnings announcement.