Stocks were mixed on Tuesday with the indices experiencing rather innocent moves as investors appeared to be waiting to see what the earnings results would show after the close.

The Dow led the way with a gain of 0.21% and it was the only one in positive territory. The Russell was the second best performer, but suffered a modest loss of 0.08%. The S&P dropped 0.15% and the Nasdaq was by far the worst performer with a decline of 0.81%.

Those were the only two to gain more than one percent.

The communication services sector experienced the worst loss at 1.18% and it was followed by tech with a loss of 1.01%.

It was interesting to see communication services lead the way lower ahead of Apple’s earnings announcement after the close.

My scans produced yet another bearishly skewed result on Tuesday with 18 names on the bearish list compared to six on the bullish list.

The barometer moved up to -12.1 from -17 once these results were added in. The barometer has been in negative territory for 13 straight days now.

After two straight bullish trade ideas, today’s is a bearish one. FireEye (Nasdaq: FEYE) appeared on the bearish list last night and the company’s fundamental ratings are mixed with an EPS rating of 72, but the SMR rating is an E. The company’s earnings were profitable last quarter, but that was only the second profitable quarter in the company’s history. 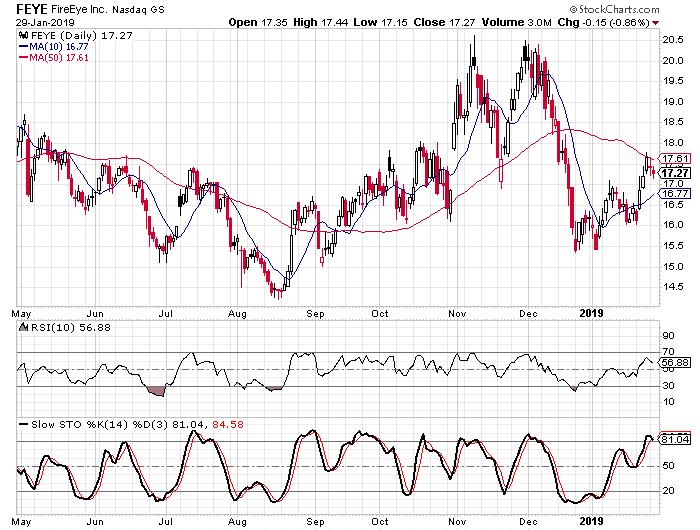 The thing that jumped out most about FireEye’s chart was how often the 50-day moving average has acted as support or resistance. In the second quarter the moving average killed a number of rallies before the stock moved above the 50-day in the fourth quarter. Once it moved above the trendline, it acted as support on a few occasions. The 50-day seems to be acting as resistance once again.

Buy to open the March $18-strike puts on FEYE at $1.60 or better. These options expire on March 15. These options will double if the stock drops to $14.80. To reach that level, the stock will have to drop below the December low, but it won’t have to break to a new 52-week low as the stock was down to $14.20 in August. The company is set to announce earnings next Wednesday, so you will want to be more cautious with his trade. I suggest a target of 100% with a stop at $17.85.