The week got off to a rough start for stocks as Caterpillar missed on its earnings estimates and NVIDIA issued a warning ahead of its earnings report. All four indices moved lower as a result of this news and the Nasdaq took the biggest hit at -1.11%. The Dow lost 0.84% and the S&P 500 dropped 0.78%. The Russell suffered the smallest loss at 0.63%.

Nine of the 10 sectors moved lower on Monday with the consumer staples sector being the only one that moved higher with a gain of 0.43%. The second best performer was the financial sector, but it lost 0.31% in the process.

[hana-code-insert name=’adsense-article’ /]The worst performing sector was the tech sector with a loss of 1.33%.

The healthcare sector (-1.14%) and the energy sector (-1.05%) joined the tech sector as the only other ones with losses over one percent.

My scans continued to drift back toward the bullish side, but remained skewed toward the bearish side—just with a smaller differential.

There were 13 names on the bearish list and six on the bullish side.

For the second straight day I have a bullish trade idea for you.

Homebuilder PulteGroup (NYSE: PHM) appeared on the bullish list and is scheduled to release earnings this morning. The company scores a 96 on the EPS rating and an A on the SMR rating. The company has seen tremendous earnings and sales growth over the last few years and in recent quarters. 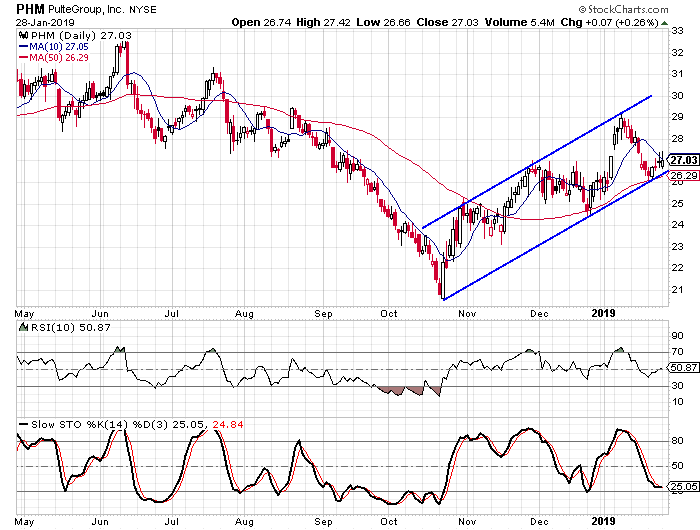 The chart shows how a trend channel has formed over the last three months and the stock recently hit the lower rail of the channel. The lower rail is in close proximity to the 50-day moving average and the gives the stock two layers of support. We also see that the daily stochastic readings reached a low last week and are starting to turn higher after a bullish crossover.

Buy to open the March $26-strike calls on PHM at $2.10 or better. These options expire on March 15. These options will double if the stock reaches $30.20. With the company announcing earnings this morning, this could be a tough trade to get in to. If the company beats earnings estimates it could gap higher and the price of the options could be higher. If it misses on earnings estimates, the stock could move below the lower rail and the 50-day. This trade idea is different from most, but because the earnings will have already been released, the risk level will actually be lower by the time you can enter it. I suggest a target gain of 100% with a stop at $26.