[hana-code-insert name=’adsense-article’ /]As I mentioned the defensive sectors were the two that lost ground on Friday.

My scans continued to narrow the discrepancy between the two sides with 18 names on the bearish list and six names on the bullish list.

The differential of 12 is the smallest since the 12-day stretch of negative readings started.

The barometer moved up to -34.7 from -52.6 once these results were added in to the equation.

With the tone of the market remaining positive for now, today’s trade idea is a bullish one and it is on Lowes Companies (NYSE: LOW). The company scores an 81 on the EPS rating and a B on the SMR rating. 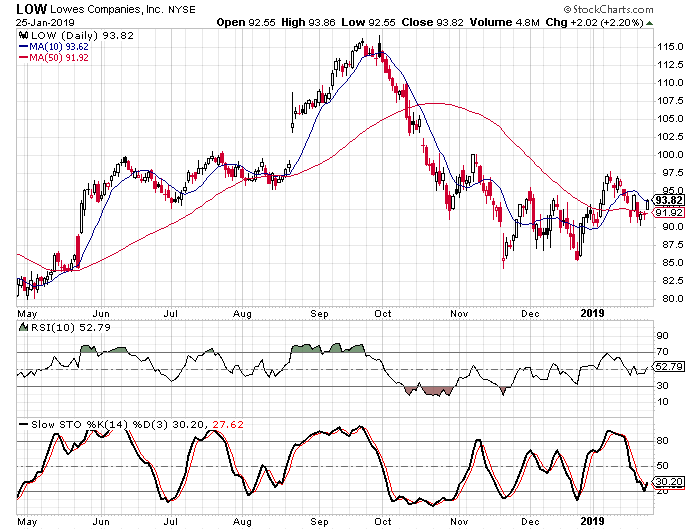 The thing that jumped out at me most on Lowes was how the stock had dipped slightly in the last few weeks, but then jumped higher on Friday to move back above its 50-day moving average. The stock made a similar move back in August and jumped sharply higher on earnings. The company is set to announce earnings again on February 27.

Buy to open the March $90-strike calls on LOW at $6.60 or better. These options expire on March 15. These options will double if the stock reaches $103.20. This would take the stock back up to the area where it gapped higher in August and gapped lower in October. I suggest a target gain of 100% with a stop at $90.50.