Stocks were mixed once again on Thursday and that led to discrepancy in the results from the indices. The Nasdaq led the way with a gain of 0.68% and it was followed by the Russell with a gain of 0.59%. The S&P notched a small gain (0.14%) and the Dow was the only one of the four to suffer a loss at -0.09%.

The sectors were also mixed with seven moving higher and three moving lower. The tech sector led the way with a gain of 0.85% and it was boosted by solid earnings results from three chip companies on Wednesday night. The energy sector was the second best performer with a gain of 0.58%.

[hana-code-insert name=’adsense-article’ /]Of the three sectors in negative territory, the consumer staples sector suffered the worst loss at 1.25%.

The scans remained bearishly skewed, but the results weren’t as negative as the two previous nights.

Today’s trade idea comes from the bearish side of the ledger and it is on HP Inc. (NYSE: HPQ). Hewlett Packard’s parent company has struggled in recent years and that has resulted in an EPS rating of 49. The company doesn’t have an SMR rating right now because there isn’t a clear ROE. Sales have only grown at a rate of 6% per year over the last three years and the profit margin is a paltry 5.6%. 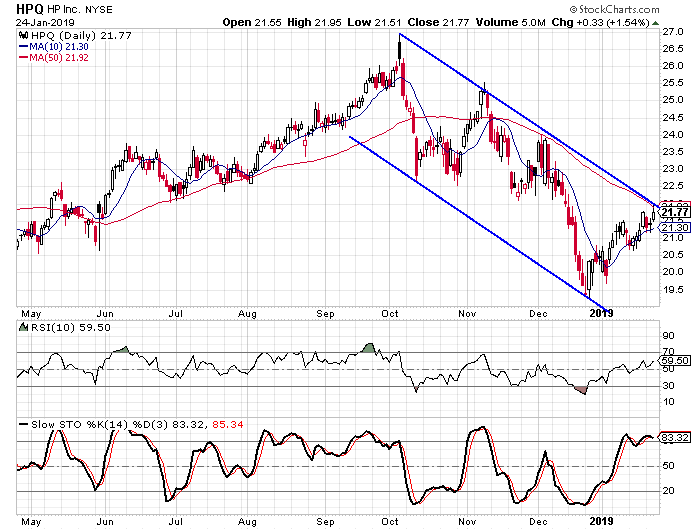 We see on the chart that the stock has been trending lower since October and a downward sloped trend channel has formed as a result. The upper rail is right on top of the 50-day moving average and that makes for a dual layer of resistance for the stock. You can see how the 50-day acted as resistance in early December.