Stocks were mixed on Wednesday and that showed in the performance of the indices. The Dow led the way with a gain of 0.70%. The S&P and Nasdaq opened in positive territory, moved in to negative territory in the middle of the session, and then notched small gains of 0.22% and 0.08% at the end of the day. The Russell finished with a loss of 0.32%.

The sectors were mixed with a slight upward bias. There were seven that moved higher on the day and three moved lower. On the positive side, the defensive sectors led the way with consumer staples gaining 1.16% and utilities gaining 1.05%.

Despite the discrepancy between the bull and bear list, the trade idea for today is from the bullish list and it is on the VanEck Vectors Gold Miners ETF (NYSE: GDX).

Gold mining stocks have been gaining ground during the increased volatility in the overall market as investors seek a safe haven. 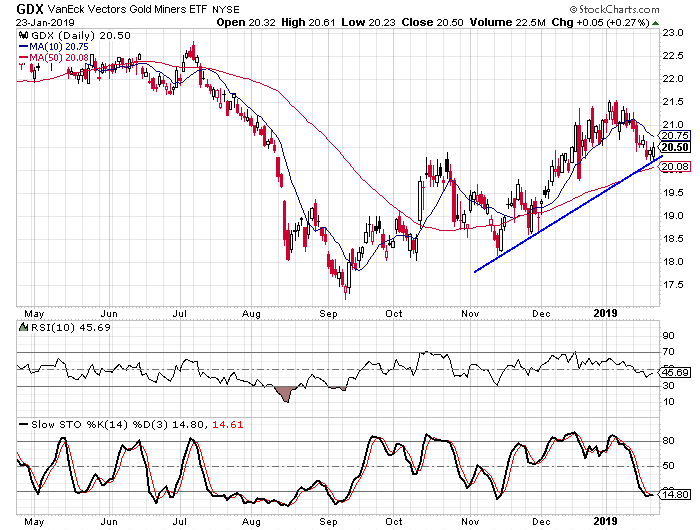 The fund has been trending higher since mid-November and a trend line has formed that connects that low with the low from later in the month. The trendline is currently in the $20.40 area and that was the same area where the fund peaked in October which makes it a possible support area.