Stocks slipped on Tuesday as the International Monetary Fund gave a dire forecast for the global economy in the coming years. The government shutdown continues to weigh on the market as well, it just got put on the backburner for the last few weeks.

[hana-code-insert name=’adsense-article’ /]Nine of the ten sectors fell on Tuesday with the utilities sector notching a small gain (0.17%) as the only one in the green.

The healthcare sector lost 0.69% and the consumer staples sector lost 0.86% and those were the only two that kept the losses under one percent.

On the negative side of the ledger, there were three sectors that lost over two percent and they were led by the energy sector which lost 2.22%.

With the drop in the indices, my scans moved to a more bearish posture again with 118 names on that side of the equation and only three names on the bullish side.

The barometer dropped from -43.4 to -67.2 once those results were added in to the formula.

The trade idea for today is another bearish one and it is on Murphy Oil Corp. Holding (NYSE: MUR). The stock appeared on the bearish list and the fundamental rankings are mixed. The EPS rating is above average at 72, but the SMR rating is below average with a D. The earnings were up dramatically last quarter, but have been flat over the last three years. Sales have declined in the last three years and the profit margin is below average at 2.4%. 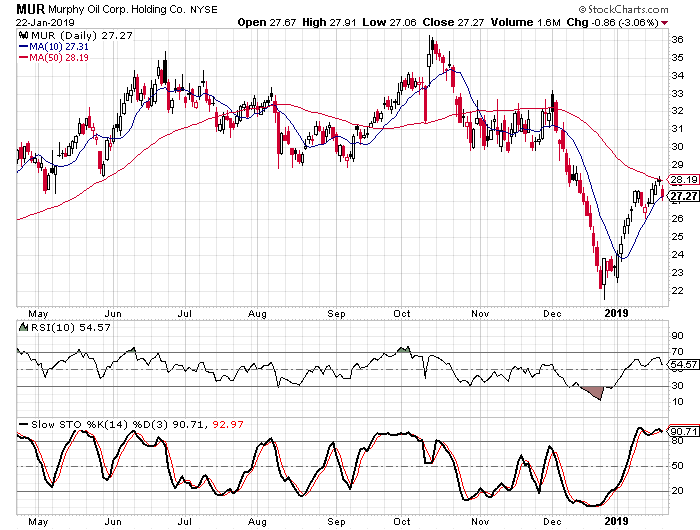 You can see how the stock dropped sharply during December—even more sharply than the overall market. The stock has rallied back as the overall market has rallied, but it has hit resistance at its 50-day moving average and it is oversold based on the daily stochastic readings. The company is scheduled to report earnings on January 30, so you will want to be a little more cautious with this trade.