Friday brought another round of buying for stocks and all four indices moved considerably higher, but they seemed to be split into two groups. The Dow led the way with a gain of 1.38% and it was followed by the S&P which notched a gain of 1.32%. The Russell (1.04%) and the Nasdaq (1.03%) were in the lower group in terms of smaller gains, but both still gained over one percent.

All ten sectors moved higher, but there was a big discrepancy from the top to the bottom. The energy sector led the way with a gain of 2.03% and it was followed by the industrial sector with a gain of 1.9%. In all, eight of the 10 gained over one percent on the day.

[hana-code-insert name=’adsense-article’ /]The two sectors that didn’t manage to log gains over one percent were the utilities sector (+0.11%) and communication services (+0.81%).

My scans remain bearishly skewed with 38 names on the bearish list Friday night compared to four on the bullish list.

That was the eighth straight night that the scans have been negatively skewed.

With the limited number of bullish readings to choose from, I have another bearish trade idea for you today.

Colgate-Palmolive (NYSE: CL) appeared on the bearish list Friday night and its fundamentals are interesting. The EPS rating is a 46, but the stock doesn’t have an SMR rating currently because the ROE is at zero. The company’s earnings and sales declined in the most recent quarter. 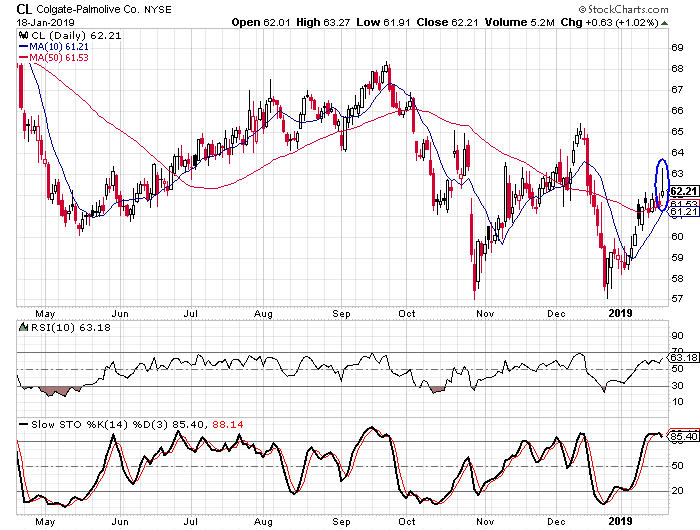 The chart for Colgate is a little different from what you usually see from me. Rather than a trend line or a trend channel, what we have on the daily chart is what is called a shooting star pattern in candlestick vernacular. You see how the stock opened slightly higher on Friday and shot up to a much higher level. It then fell back down to close near the same price that it opened at. The idea is that when this pattern occurs after an upward trend that it is a sign that reversal is coming. The bulls were in control over the last few weeks and were in control early on Friday, but bears seized control during the day.

Buy to open the March $65-strike puts on CL at $3.95 or better. These options expire on March 15. These options will double if the stock drops to $57.10. The lows in October and December were right in that area, so that seems like a reasonable target. Colgate will release earnings on January 25, so you want to be a little more cautious with this trade. I suggest a target gain of 100% with a stop at $63.30.