Stocks moved higher again on Thursday as all four main indices moved higher for a third straight day. All four opened in negative territory and then rallied. The market got a boost in the afternoon when rumors surfaced that the U.S. may ease tariffs on Chinese goods. That was enough for investors to jump on board.

[hana-code-insert name=’adsense-article’ /]All ten sectors moved higher on Thursday, but unlike the indices there was a wide dispersion in their performances.

The communication services sector had the smallest gain at 0.36%.

The utilities and consumer staples sectors were the only other ones with gains less than 0.5% at 0.42% and 0.43%, respectively.

The scans shifted to a considerably less bearish skew last night, but they remained negative in nature.

There were 19 names on the bearish list and four on the bullish side of the ledger. That is the smallest negative reading in the last six trading days.

The barometer moved up considerably with the less bearish results. The reading moved from -115.3 on Wednesday to -70.4 last night.

After six straight bearish trade ideas, I have a bullish one for you today. AstraZeneca (NYSE: AZN) appeared on the bullish list last night and it is somewhat of an unorthodox trade idea. The fundamentals are mixed with an EPS rating of 29, but the SMR rating is a B. Even with these ratings, the chart looked too good to pass up. 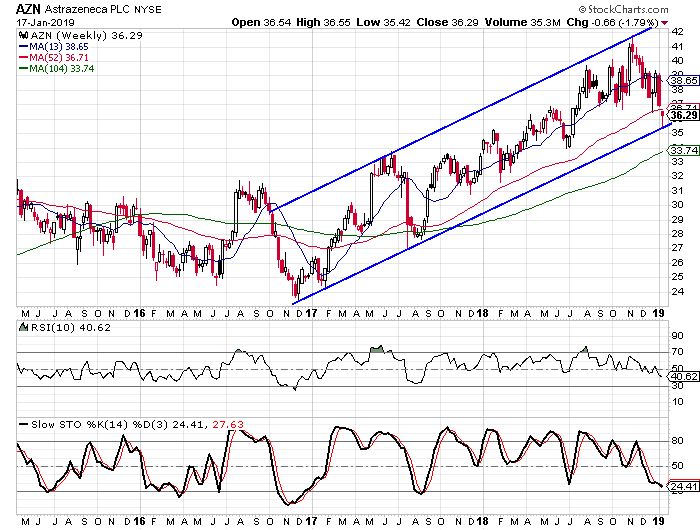 We see on the weekly chart that the stock has formed a trend channel over the last two years and the stock just bounced off of the lower rail of the channel. The daily stochastic readings made a bullish crossover yesterday and the weekly stochastic readings have reached a similar level to what they reached in June before turning higher. The stock rallied from the $34 area and moved above the $41 level by November.

Buy to open the July $35-strike calls on AZN at $2.80 or better. These options expire on July 19. These options will double if the stock reaches $40.60. That level is below the upper rail at this time and it gives the stock six months to reach the target. I suggest a target gain of 100% and a stop at $35.