The sectors were evenly split yesterday with five moving higher and five moving lower. As you might have deduced from my comment above, the financial sector led the way with a gain of 2.13% and it was the only sector to log a gain over 1%. The materials sector was second with a gain of 0.39%.

[hana-code-insert name=’adsense-article’ /]Of the five sectors in the red on the day, the consumer staples sector was the worst performer with a loss of 0.54%.

The communication services sector was second worst with a 0.43% loss.

My scans remain bearishly skewed with 84 names on the bearish list and four on the bullish list last night.

One of the reasons my scans continue to produce a large number of bearish signals is due to the number of stocks that are in overbought territory based on their daily stochastic readings and 10-day RSI.

The barometer moved up slightly from -134.1 to -115.3, but it remains solidly in negative territory.

I hate to keep giving readers bearish trade ideas, but with my scans being so bearish over the last week, they are what make the most sense right now. Today’s idea is another bearish one and this time it is on SeaWorld Entertainment (NYSE: SEAS). The company has mixed fundamentals with a 70 on the EPS scale and an E on the SMR rating. 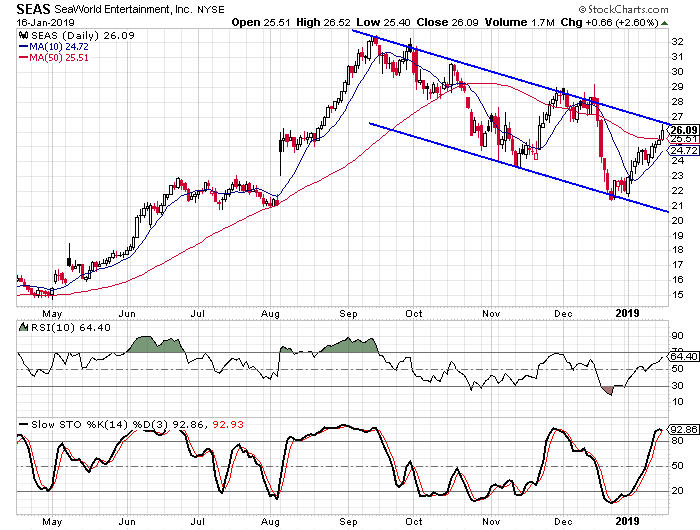 The daily chart for the stock shows a downward sloped trend channel forming over the last four months and the stock is hovering near the upper rail currently. The stochastics are in overbought territory and have made a bearish crossover like they did in late November—right before the stock dropped from up around $29 all the way down below $22.00.