For the first time since January 3, all four indices moved lower on Monday. You may recall that January 3 was the day after Apple issued an earnings warning. While all four indices were down, there was a clear divide in the performances. The Russell suffered the worst loss at 0.97% and the Nasdaq was second with a loss of 0.94%. The S&P and Dow experienced more modest losses at 0.53% and 0.36%, respectively.

Nine of the 10 sectors lost ground yesterday and the utilities sector was by far the worst performer with a loss of 2.27%. The potential bankruptcy of PG&E drug the entire sector down. The only other sector to lose more than 1.0% was the healthcare sector and it lost 1.1%.

[hana-code-insert name=’adsense-article’ /]The only sector that gained ground on the day was the financial sector with a gain of 0.65%.

Citigroup reported earnings before the open and the initial reaction was negative, but then the stock reversed course and finished higher by 3.95% and it took the sector with it.

My scans turned even more bearish on Monday night with 221 names on the bearish list and only three on the bullish list.

The -140 is the lowest reading the barometer has produced since I started tracking it 10 years ago.

Before we get to today’s trade idea, I wanted to let readers know why I haven’t been providing trade ideas on the overall market using the Spyders, EEM or the like. The reason for that is because I recently launched a newsletter on Seeking Alpha’s Marketplace and it includes option trades on the overall market. Because of this, I didn’t feel it would be fair for me to provide such trades in this column any longer. I hope you understand. 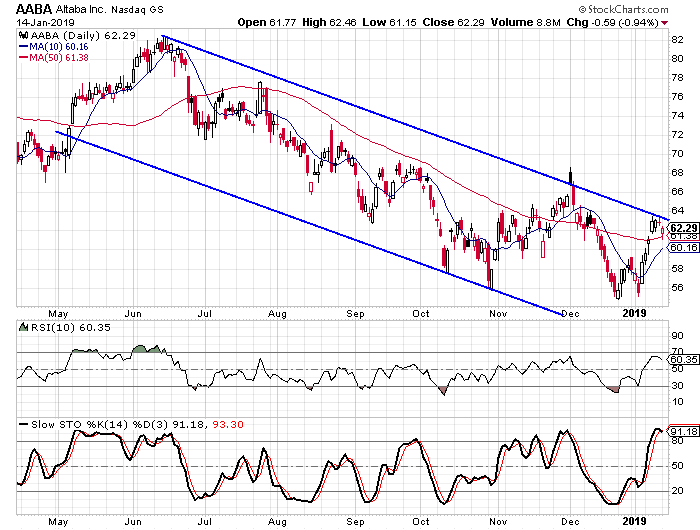 The daily chart shows a downward sloped trend channel connecting the highs from June and December, and it shows the stock hitting the upper rail in the last few days before turning lower yesterday. The stochastic readings made a bearish crossover just like we saw at the beginning of December when the stock plunged 18% in three weeks.