The winning streak came to an end for three of the four indices on Friday. All four of them were down significantly in early trade, but rallied back and almost made it to positive territory.

The lone exception was the Russell which managed a gain of 0.14% and extended its winning streak to six days. The losses for the Dow and S&P were minimal at 0.02% and 0.01%, respectively. The Nasdaq lost 0.21% on the day.

[hana-code-insert name=’adsense-article’ /]Six of the 10 sectors dropped on Friday while four moved higher.

None of the moves were greater than 1.0% on either side.

The healthcare sector notched the biggest gain at 0.33% and it was followed by the consumer staples sector with a gain of 0.29%.

The biggest loss came from the energy sector at 0.59% and it was followed by the communication services sector with a loss of 0.50%.

My scans turned even more bearish on Friday evening with one name on the bullish list and 119 names on the bearish list.

The barometer dropped from -30.2 to -72.6 once these results were added in to the equation.

There were a number of stocks on the bearish list that I considered for the trade idea for today, but Bausch Health Companies (NYSE: BHC) seemed to make the most sense. The company’s fundamental ratings are mixed with a 31 EPS rating, but a B in the SMR rating system. Sales and earnings have been declining in the last three years. 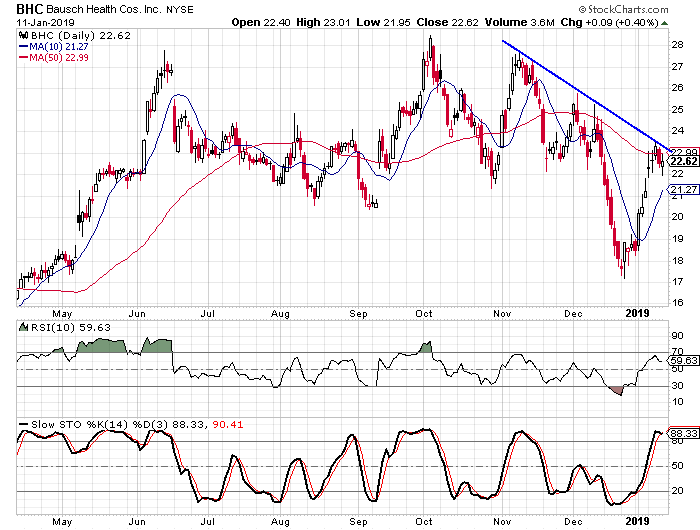 You can see how the stock has been trending lower in recent months and a trend line has formed that connects the series of highs between declines in the stock. The drop in December was a sharp one and then the stock rallied back in the last few weeks to hit the trend line. The stochastic readings are in overbought territory and made a bearish crossover on Friday.