Stocks moved higher for a third straight day on Tuesday. The move seemed to come on the hopes of investors that progress was being made in the trade talks in Beijing. The Russell led the way with a gain of 1.31%.

[hana-code-insert name=’adsense-article’ /]All 10 of the main sectors were higher on the day as well.

The communication services sector led the way with a gain of 1.68%.

The industrial sector notched a gain of 1.39% and that was good for the second best move.

In all, five sectors finished with gains of over 1.0%.

The financial sector had the worst performance of the 10 and barely squeaked in to positive territory with a gain of 0.02%.

The tech sector lagged the others and managed a gain of 0.84% despite a profit warning from Samsung.

My scans produced positive results for a third straight night with 19 names on the bullish list and 10 on the bearish list. The barometer moved up slightly from 11 to 13.4 as a result of the third straight bullish skew.

One of the names on the bullish list that stood out for both its fundamentals and its chart was Analog Devices (Nasdaq: ADI). The company scores an 80 on IBD’s EPS rating system and it gets an A in the SMR category. 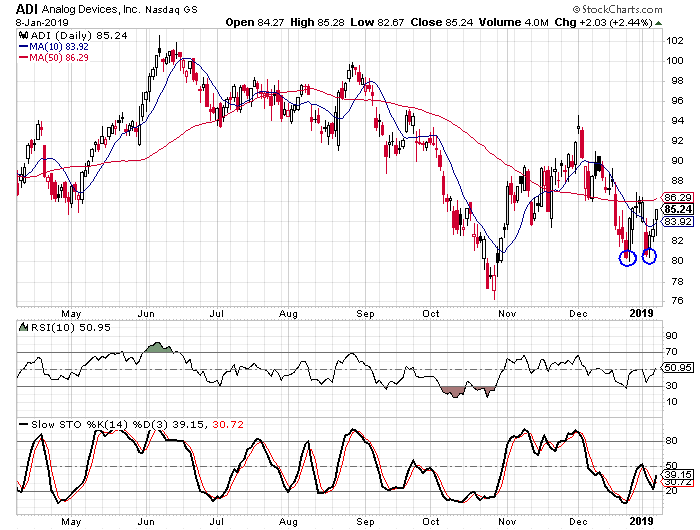 The thing that jumped out at me regarding the chart was the possible double-bottom pattern in the $80 area. For this pattern to play out completely, the stock will need to move above the high reading between the two lows and I don’t see that being a problem. I see the potential for resistance in the $95 area being a bigger concern.