Two different news items helped propel stocks higher on Friday. The first thing to boost the market was news that the U.S. and China would meet again to discuss the ongoing trade battle. That news had futures moving higher ahead of the December employment report and then when that report blew away expectations, the market was ready to roar.

All four of the main indices moved sharply higher on the day with the Nasdaq leading the way with a gain of 4.26%. The Russell notched a gain of 3.75% for the second best performance and the S&P gained 3.43%. The Dow logged the smallest gain of the bunch at 3.29%.

[hana-code-insert name=’adsense-article’ /]All 10 main sectors rose on the day with the tech sector leading the way with a gain of 4.43%.

The energy sector also gained over four percent with a jump of 4.3%.

There were five other sectors that gained between 3% and 4%.

The only sector that didn’t gain at least 2% was the utilities sector which notched a gain of 1.48%.

My scans did flip back to a slight bullish skew on Friday night with 12 names on the bullish list and seven names on the bearish side.

Of the 12 names on the bullish list, seven were either Chinese companies or Chinese-related ETFs.

The barometer came in with a reading of -5.7 at the end of the day.

One of the Chinese companies on the bullish list was Weibo (Nasdaq: WB). The social media company has strong fundamentals with an EPS rating of 98 and an SMR rating of an A. Despite those fundamentals, the stock has been hit hard over the last 11 months as the trade war has waged on. 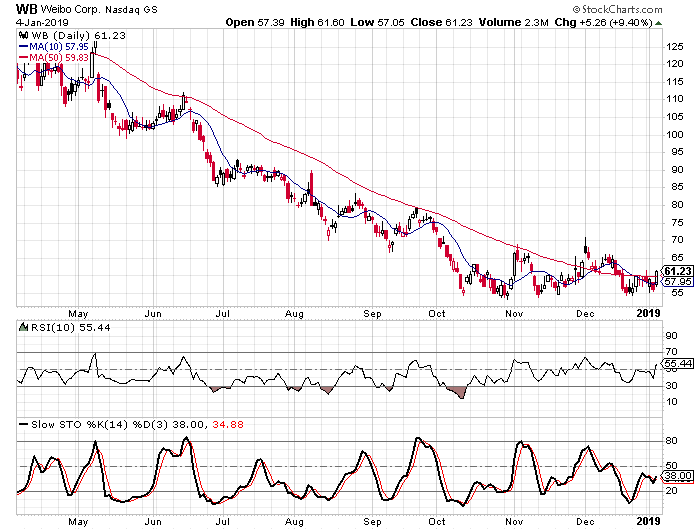 While the stock has been trending lower for the last 11 months, it appears to have found a certain amount of support in the $55 area. The stock moved above its 50-day moving average on Friday and that hasn’t happened very often in the last six months. If there are positive developments in the trade talks, the stock could jump sharply in a short amount of time.

Buy to open the February $60-strike calls on WB at $6.00 or better. These options expire on February 15. These options will double if the stock hits $72. The recent high in December was just short of $71, so the stock will have to break through some minor resistance to hit our target. This is a riskier trade and its success could hinge on the trade talks, so I urge you to use caution with this trade. I suggest a target of 100% with a stop at $55.