Earnings warnings from Apple and Delta Airlines doomed the indices from the get-go yesterday. All four lost ground, but the Russell held up way better than the other three by only dropping 1.06%. The Nasdaq suffered the worst loss at 3.04% and it was followed by the Dow with a loss of 2.83%. The S&P dropped by 2.48%.

Nine of the 10 main sectors declined on Thursday with the utilities sector breaking even on the day.

[hana-code-insert name=’adsense-article’ /]As you might expect with Apple lowering guidance, the tech sector took the worst loss at 5.03%.

The industrial sector suffered the second worst loss at 3.03%.

There were another four sectors that lost over two percent.

The barometer fell from -2.3 to -10.8 once these results were added in to the equation.

There were several names on the bearish list where the chart jumped out at me, but the fundamentals were pretty strong. One name that had mixed fundamental ratings, but the chart stood out in a bearish way, was Marvel Technology Group (Nasdaq: MRVL). The company scores an EPS score of 31 and an SMR rating of an A. 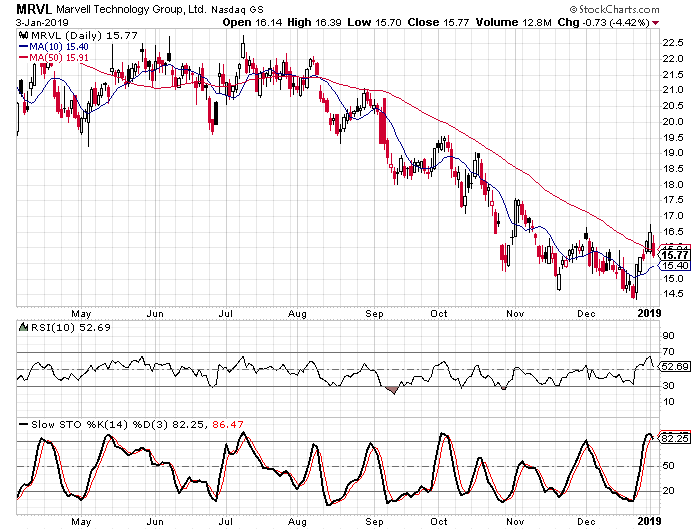 What jumped out at me the most about Marvell’s chart was quite simple. Each time the stochastic readings have made a bearish crossover in the last five months, the stock has fallen over $2.00. The stochastics didn’t even have to be in overbought territory for this to apply. The crossovers in mid-October and early November occurred when the stochastics were barely over 50 and they still saw the stock drop sharply.