After opening sharply lower, stocks rallied throughout the day and all four indices finished higher. The selling in the morning was so bad that the Dow got off to its worst start to a new year since 1932.

[hana-code-insert name=’adsense-article’ /]The sectors were mostly higher with seven finishing in positive territory and three finishing in the red.

Those were the only two sectors to gain more than one percent.

The consumer staples sector (-0.53%) was the third sector to lose ground and that made it a clean sweep for the defensive sectors moving lower on the day.

My scans continued to produce low numbers on both sides. In last night’s results we saw 11 names on the bearish list and not a single signal on the bullish side once again.

The results caused the barometer to fall in to negative territory with a reading of -2.3. This is the first negative reading since December 10.

One name from the bearish list that stood out was the iShares MSCI India ETF (AMEX: INDA). The fund fell yesterday and the Indian market opened 2019 with a loss on Wednesday. The Bombay Sensex has been having trouble moving back above the 36,500 level in recent weeks. 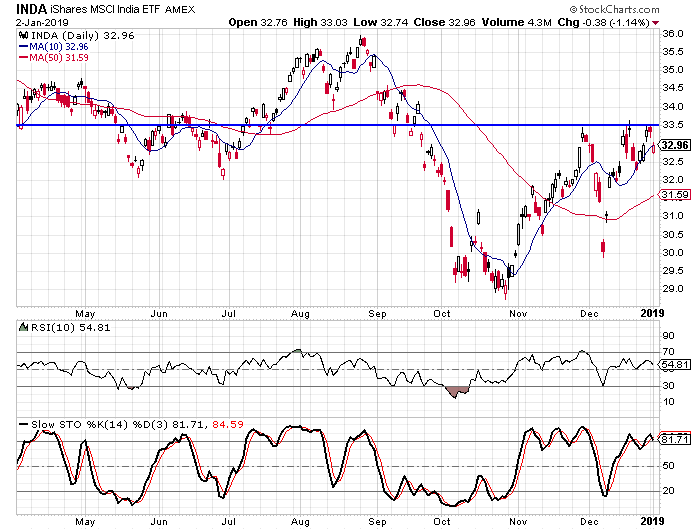 You can see on the chart of the fund that it has had trouble moving back above the $33.50 level. It has made three attempts in just over a month and hasn’t been able to close a day above the area since falling below it in September.

Buy to open the February $34-strike puts on INDA at $1.65 or better. These options expire on February 15. These options will double if the fund falls to $30.70. The fund dropped below $30 back in early December, so it wouldn’t have to reach a new low for the options to double. I suggest a target gain of 100%. I would also suggest closing the trade if the fund closes above $33.50.