Monday saw all four of the main indices move higher on the last trading day of 2018. It wasn’t a day of straight upward movement as both the Nasdaq and the Russell dipped in to negative territory at various points during the day before rallying in the afternoon.

[hana-code-insert name=’adsense-article’ /]All ten sectors moved higher on Monday with three logging gains of one percent or more.

The healthcare sector led the way with a gain of 1.48%. The consumer discretionary sector gained 1.07% and the industrial sector notched a gain of 1.0%.

My scans dropped off once again and the barometer dropped as a result.

There weren’t any bullish signals on Monday night while there were only four names on the bearish list.

The barometer dropped from 85.2 to 41.5 once these results were added in to the calculation.

There weren’t any stocks on the bearish list that really got my attention, so I scanned a number of weekly charts. One stock that jumped out was Darden Restaurants (NYSE: DRI). The company scores a 92 on IBD’s EPS rating and it scores an A in the SMR category. 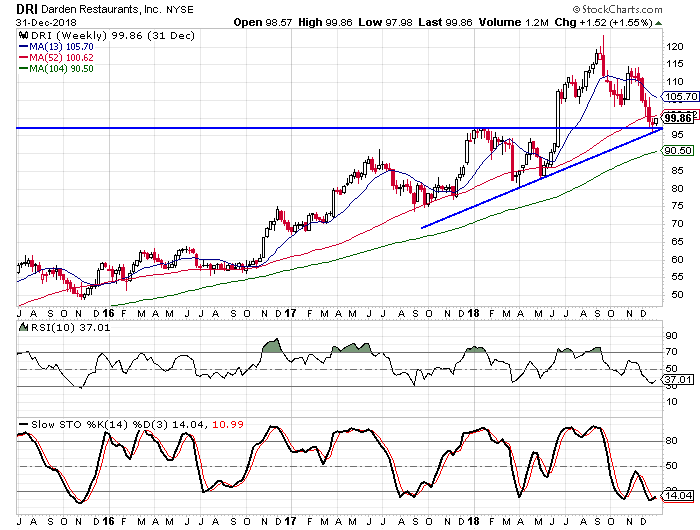 What we see on the chart is a trendline connecting the lows from April and May. The stock just hit that trendline last week. You can also see that there is a secondary support level in the $97 level. This area served as resistance back in January and then the stock broke through. It is quite common for former resistance points to become support levels on pullbacks.

Buy to open the February $95-strike calls on DRI at $7.00 or better. These options expire on February 15. These options will double if the stock hits $109. That level is only 9.1% from where the stock closed on Monday and I think the stock can get to $109 without much trouble. I suggest a target gain of 100% with a stop at $95.