[hana-code-insert name=’adsense-article’ /]As for the sectors, six fell on Friday, one finished unchanged, and three gained ground.

The consumer staples sector was the sector that was unchanged.

On the negative side, the energy sector suffered the worst loss at 0.77%.

The materials sector had the second worst loss at 0.54%.

The scan results dropped off sharply on Friday with only three names on the bullish list and two on the bearish side. The barometer dropped from 131.8 to 85.2 once the results were added in to the calculation. I expect the barometer to continue to fall in the next few days.

Despite the low number of signals on each side, there was one chart that stood out enough to make it today’s trade idea. The VanEck Vectors Junior Gold Miners ETF (NYSE: GDXJ) was on the bearish list Friday. I recommended bullish trades on the SPDR Gold Shares (NYSE: GLD) in September and November and both of those trade ideas hit their targets during the recent gold rally. But, the GDXJ is hitting resistance. 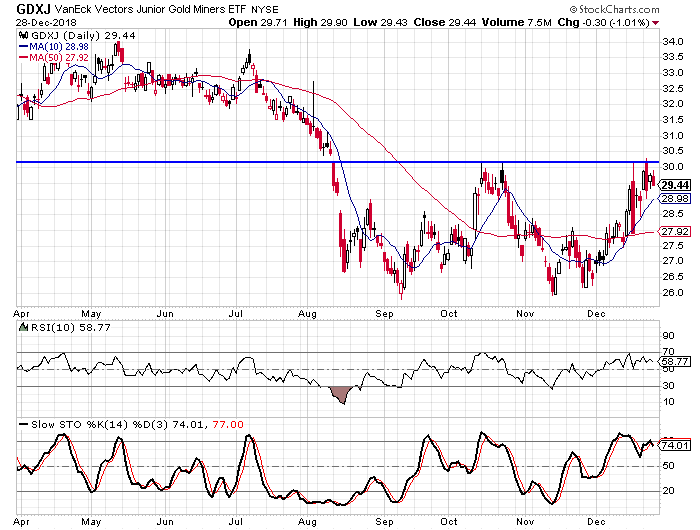 We see on the chart that the $30.20 area is important for several reasons. First, when the ETF gapped lower in August, this area was the top of the gap. The fund rallied back up to the level in October before falling back down. Now the fund has rallied back up to this area, but it is overbought based on the daily stochastic readings. I look for the ETF to turn lower again.