Thursday looked as though it was going to bust the big Santa Claus rally from Wednesday as the indices were suffering sharp losses through most of the day. A late rally lifted three of the four in to positive territory.

[hana-code-insert name=’adsense-article’ /]All ten sectors moved higher again on Thursday, but the gains weren’t nearly as dramatic as they were on Wednesday.

The materials sector led the way yesterday with a gain of 1.9%. The industrial sector finished with the second biggest gain at 1.28%. There were four sectors that logged gains of over one percent.

The consumer discretionary sector was the worst performer with a gain of 0.38% and it just squeaked past the communications sector which notched a gain of 0.44%.

For Thursday, there were 31 names on bullish list and once again there weren’t any names on the bearish list.

The barometer fell from 178.4 to 131.8, but that was to be expected after the huge reading on Wednesday.

Unfortunately I had some issues with Investor’s Business Daily last night and couldn’t access the database, so I was flying blind with the fundamental ratings. One theme from the bullish list was utilities stocks were abundant and American Electric Power (NYSE: AEP) stood out to me. 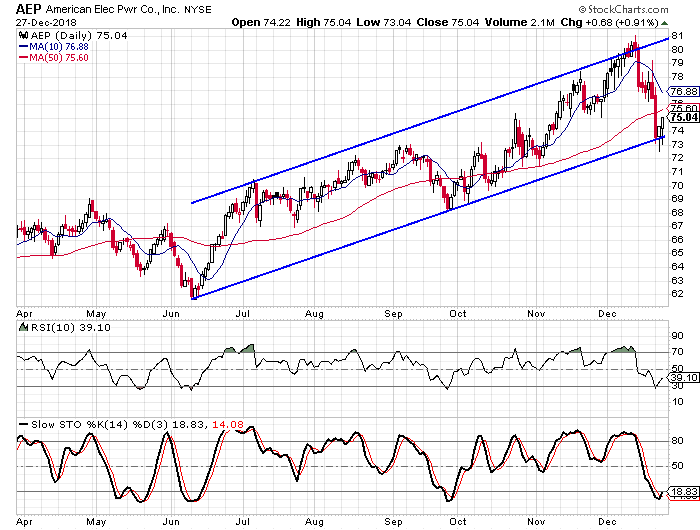 You can see on the chart that a trend channel has formed over the last six months and the stock just bounced off of the lower rail of the channel. We also see a bullish crossover from the stochastic readings. This also occurred in late September, just before the stock rallied.

Buy to open the February $75-strike calls on AEP at $2.75 or better. These options expire on February 15. These options will double if the stock hits $80.50 and that price is just below the recent high and below the upper rail of the channel. I suggest a target gain of 100% with a stop at $73.