Wednesday brought the bounce I have been looking for in recent days. Stocks were just too oversold for us not to get a huge bounce like we got yesterday. All four indices jumped sharply higher, but the Nasdaq really stood out with a gain of 5.84%. The Dow was the second best performer with a gain of 4.98% and it was followed by the S&P with a gain of 4.96%. The Russell lagged the others and still gained 4.56%.

All ten sectors moved higher on Wednesday and eight of them moved up by more than four percent. The energy sector led the way with a gain of 6.17% and it was followed by the tech sector with a gain of 5.95%.

[hana-code-insert name=’adsense-article’ /]The defensive sectors lagged the rest of the market and they were the only two that didn’t gain over four percent.

The utilities sector gained 1.4% on the day and that was the worst performance of the bunch.

I started running my nightly scans in 2008 and started tracking the barometer at the beginning of 2009.

Last night’s scans produced the most lopsided results ever and it wasn’t even close.

There were 366 names on the bullish list and not a single bearish signal. The second biggest differential came on August 23, 2011 at 290.

Obviously the trade idea for today is a bullish one given the barometer reading and resounding bullish skew from the scans. One name on the list that jumped out at me was the Healthcare Select Sector SPDR (NYSE: XLV). The sector ETF is one of the few that is still above its 104-week moving average. 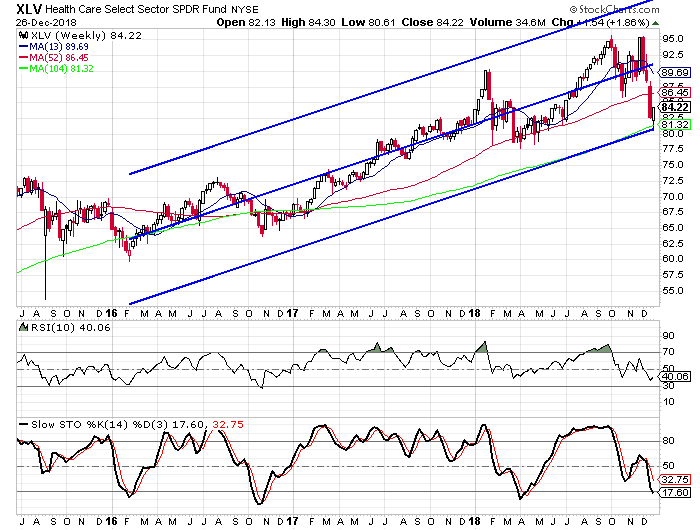 We see a Raff Regression channel on the weekly chart and you can see how the XLV moved further away from its regression line than at any point in the last three years. I look for the fund and the overall market to bounce sharply in the coming weeks.

Buy to open the February $84-strike calls on XLV at $4.00 or better. These options expire on February 15. These options will double on an intrinsic basis if the fund hits $92. That is well below the recent high. I suggest a target gain of 100% with a stop at $82.50.