Christmas Eve trading didn’t bring any gifts to the bulls as stocks got hit hard in abbreviated session. All four indices fell for a fourth straight session and the S&P fell in to a bearish mode by falling more than 20% from its high.

The Dow suffered the worst loss on Monday at 2.91% and it was followed by the S&P which dropped 2.71%. The Nasdaq took a 2.21% loss and the Russell suffered the smallest decline at 1.95%. That is the eighth straight down day for the Russell.

[hana-code-insert name=’adsense-article’ /]I ran a scan Monday evening for the stocks in the S&P 500.

Looking at the daily stochastic readings and the traditional demarcation point of 20, there are 479 S&P members in oversold territory at this time.

Running a similar scan for the 10-day RSI and the traditional 30 level, 444 S&P members are in oversold territory.

All ten sectors fell again on Monday and two of them dropped over four percent.

The utilities sector got hit the hardest with a loss of 4.18% while the energy sector fell 4.05%.

The only sector that didn’t drop at least two percent was the consumer discretionary sector (-1.90%).

Because of how oversold the market is, my scans continue to produce more bullish signals than bearish ones. On Monday the results showed 23 names on the bullish side and there wasn’t a single stock or ETF on the bearish side.

The barometer did fall from 81.7 to 60.5 once the results were added in to the calculation.

There was somewhat of a theme on the bullish list Monday night. Of the 23 names on the list, six of them were Chinese companies. Several of the Chinese companies have really good fundamental numbers, but Weibo (Nasdaq: WB) has the best looking chart in my opinion. The company scores a 98 on the EPS rating and an A in the SMR ratings system. 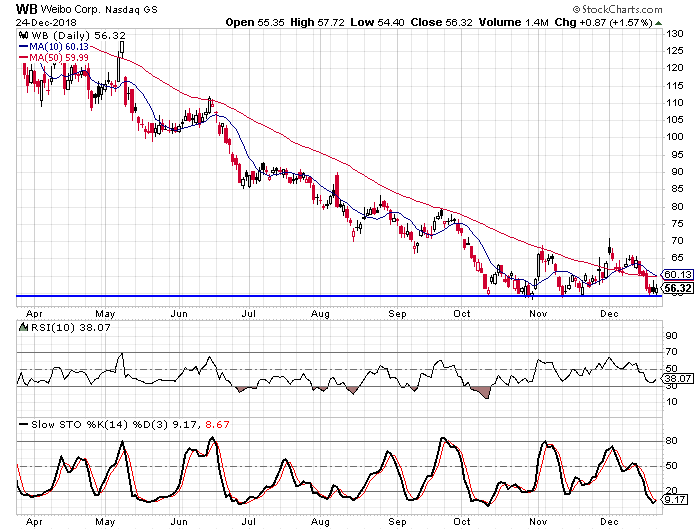 You can see on the chart how the $54 area has been acting as support over the last few months. The stock dipped down there in October, again in November, and again in the last three sessions. I look for the support to hold and with stocks so oversold, I look for the overall market to jump in the coming weeks.