It was the same old story on Friday as stocks got hammered again. Friday was a quadruple-witching day and that only added to the volatility. By the end of the day, all four indices had suffered sharp losses once again. It also presented a jump in volume and Friday ended up being the busiest trading day of the year. Normally the week before Christmas is pretty light on volume, but the weekly volume was also the top volume for the year.

All four main indices suffered sharp losses once again with the Nasdaq getting hit the hardest with drop of 2.99%. The Russell lost 2.56% for the second worst loss. The S&P fell 2.06% and the Dow lost 1.81%.

Those were the only two to drop more than three percent.

The utilities sector dropped 0.43% and that was the best performance of the bunch.

It is also worth mentioning that all ten sectors fell for the week.

That has been unusual even during this dramatic slide in stocks.

My scans remained skewed to the bullish side with 53 names on the bullish list and three on the bearish side. The barometer remained elevated at 81.7. It is also worth mentioning that 459 of the 500 stocks in the S&P are in oversold territory based on the daily stochastic readings.

With so many stocks in oversold territory, I am looking for a bounce in the coming weeks. CME Group (Nasdaq: CME) was on the bullish list Friday night and it has held up well during the recent pullback. The company also has solid fundamentals with an EPS rating of 89 and an SMR rating of a B. 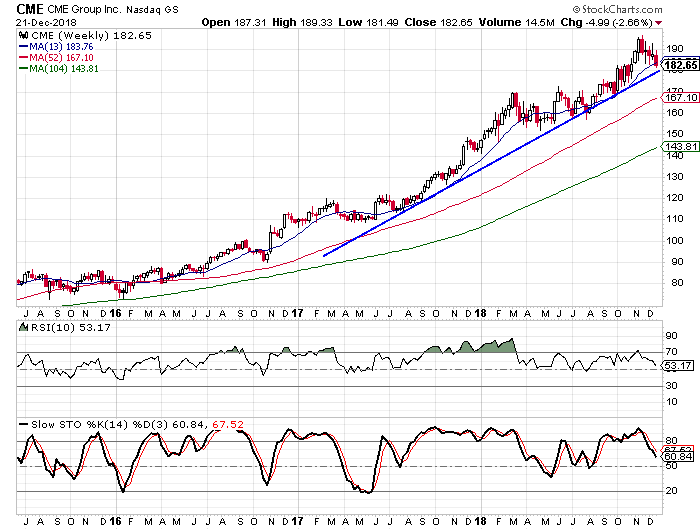 The weekly chart depicts how well CME Group has held up better than the daily chart and it also shows how the stock has been trending higher over the last few years. It also helps that we are seeing an increase in trading volume during a time of year where we usually see a slowdown.

Buy to open the March $180-strike calls on CME at $9.80 or better. These options expire on March 15. These options will double on an intrinsic basis if the stock reaches $199.60. The stock will need to break above its recent high to reach that price level, but if we get the kind of bounce I think we are going to, it should be able to get there. I suggest a target gain of 100% with a stop at $179.