Thursday turned out to be another day and another selloff for stocks. This time the drop came as President Trump announced that he would not sign the bill that the Senate had approved to provide stopgap funding for the government. Now it looks likely that there will be a government shutdown ahead of the holidays.

[hana-code-insert name=’adsense-article’ /]Nine of the ten main sectors fell on the day.

The utilities sector gained 0.09% to escape the selling.

The energy sector was the worst performer with a loss of 2.77% as oil fell sharply again yesterday.

The consumer discretionary sector was the second worst performer with a loss of 2.24%.

Those were the only two sectors that fell more than two percent.

My scans turned decidedly more bullish with so many stocks hitting oversold levels.

Part of the extreme bullish skew was likely caused by stocks bouncing pretty sharply from their intraday lows.

The barometer jumped to 87.4 from 38.6 once these results were added in to the equation. That reading is the highest since November 26 when we got the quick six-day bounce in the indices.

With the barometer suggesting that we may see a bounce in the coming days, I have another bullish trade idea for you today. The iShares MSCI Brazil ETF (NYSE: EWZ) appeared on the bullish list and the Latin American markets have held up better than others in recent weeks. 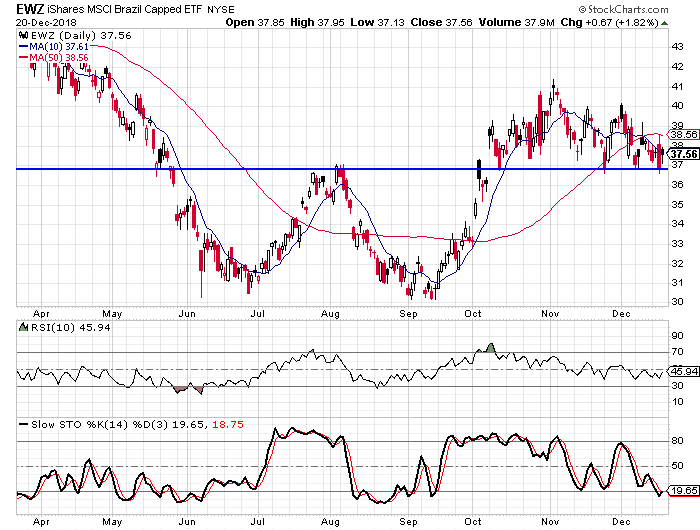 We see on the daily chart that the EWZ has dipped down to the $36.90 area three times in recent weeks and has found support there each time. The fund moved higher yesterday while most world markets were falling. I expect a bounce from the EWZ in the coming weeks.

Buy to open the February $36-strike calls on EWZ at $3.20 or better. These options expire on February 15. These options will double if the fund hits $42.40. That is slightly above the recent high, but I think it can break through that potential resistance. I suggest a target gain of 100% with a stop at $36.40.