Wednesday served to be perplexing to me. The indices were up sharply ahead of the Fed meeting and then sold off after the Fed announced a 0.25% rate hike and adjusted their statement to reflect a more dovish stance—which is exactly what most people expected. Of course when has the market ever been logical?

At the end of the day all four indices were down significantly. The Nasdaq suffered the worst loss at 2.17% and it was followed by the Russell with a loss of 2.03%. The S&P dropped by 1.54% and the Dow suffered the smallest loss at 1.49%.

[hana-code-insert name=’adsense-article’ /]All ten of the main sectors lost ground yesterday and the communication services sector took the biggest hit with a loss of 2.14%.

Seven other sectors lost over one percent with tech and consumer discretionary experiencing matching losses of 1.98%.

The only two sectors that didn’t drop at least one percent were the defensive sectors—utilities lost 0.16% and consumer staples dropped 0.97%.

My scans remained bullishly skewed and even grew more bullish despite yesterday’s decline.

There were 64 names on the bullish lost and three on the bearish side. The barometer rose to 38.6 from 24.1.

Believe it or not, there weren’t many charts that I really liked yesterday despite the 64 names to choose from on the bullish list. One stock that stood out was Paychex (Nasdaq: PAYX) and it was the weekly chart that caught my eye. The company reported earnings yesterday morning and they beat on both the EPS and revenue estimates. The company scores a 76 on the EPS rating and an A on the SMR rating. 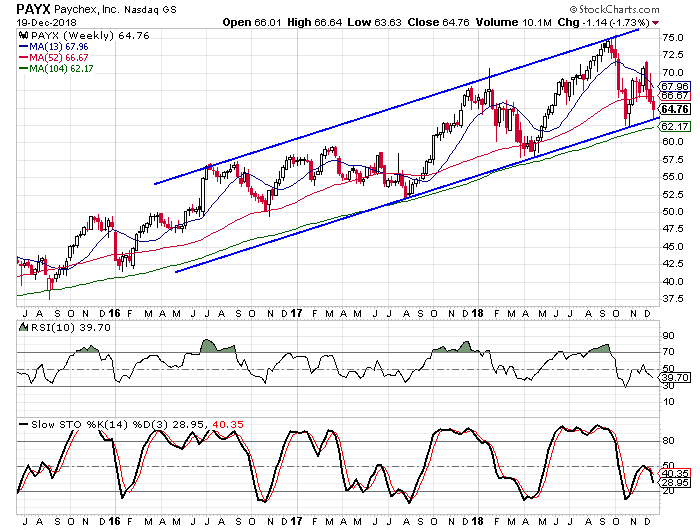 The weekly chart shows how the stock has been trending higher over the last three years within a trend channel. The stock just hit the lower rail of the channel and I am looking for it to bounce again. The sentiment toward PAYX is pretty bearish with a short interest ratio of 4.24 and out of 19 analysts following the stock only two have it rated as a “buy”. That pessimism can flip to optimism and help drive the stock higher.