Tuesday was somewhat of a wild ride for stocks with the indices gapping higher and moving sharply higher in the morning, at one point the Dow was up over 300 points. Unfortunately the indices couldn’t hold those gains and all four dropped in to negative territory in the afternoon.

The energy sector suffered the biggest loss at 2.36%. What was really odd was that all three of the defensive sectors finished lower.

The consumer staples sector lost 1.18% and that was the second worst performance of the bunch.

The healthcare sector lost 0.87% and the utilities sector dropped 0.67%.

My scans remained bullishly skewed and even widened the gap between the two lists. There were 43 names on the bullish list and only one on the bearish list. Despite the bullish skew, the barometer dropped from 33.1 to 24.1.

With the bearish list limited to one stock, today’s trade idea is a bullish one. Marriott International (NYSE: MAR) appeared on the bullish list and the company has strong fundamentals with an EPS rating of 98 and an SMR rating of a B. 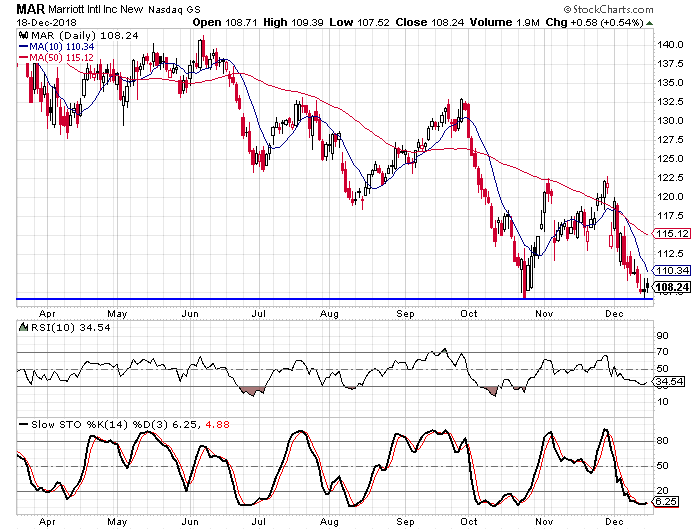 Marriott a low of $106.58 on Monday and bounced back yesterday. That price level was the same low as the one in October. When the stock hit the low in October, it bounced pretty sharply and made it back up to the $122.50 level. I am looking for a similar reaction this time.

Buy to open the January $105-strike calls on MAR at $6.20 or better. These options expire on January 18. These options will double if the stock reaches $117.40. The stock won’t have to pass through any major resistance levels to reach the target. I suggest a target gain of 100% with a stop at $106.30.