Monday was another brutal day for the market with all four indices dropping sharply. The Russell suffered the worst loss at 2.47% and it was followed by the Nasdaq with a loss of 2.27%. The Dow dropped 2.11% on the day and the S&P lost 2.08%.

The drop caused the 13-week moving average on the S&P to move below its 52-week. This means the Dow is the only one of the four main indices whose 13-week hasn’t made the bearish crossover yet.

[hana-code-insert name=’adsense-article’ /]All ten sectors dropped again, making it two straight days where we have seen that.

Something that was very different about Monday was the sector that suffered the worst loss—the utilities sector dropped 3.24%.

The defensive sectors had been holding up better in recent weeks, but we could be seeing a shift.

Consumer staples suffered a 2.33% loss on Monday and that was the third worst performance behind consumer discretionary (-2.56%).

The only sector that didn’t lose over one percent was the financial sector with a loss of 0.95%.

The scans narrowed their differential last night, but remained slightly skewed to the bullish side. There were 14 names on the bullish list and 11 on the bearish side. The barometer fell from 59.1 to 33.1 once the results were added in to the equation.

The barometer falling so sharply is reminding me of what happened in mid-October. We saw a big jump from the barometer and stocks continued falling until we got a second big positive reading from the barometer. With this in mind I wanted to stay somewhat balanced in the trade ideas, so I have a bearish one for you today. Teck Resources (NYSE: TECK) appeared on the bearish list last night. The company’s fundamentals aren’t terrible with a 58 on the EPS rating and a B on the SMR rating. 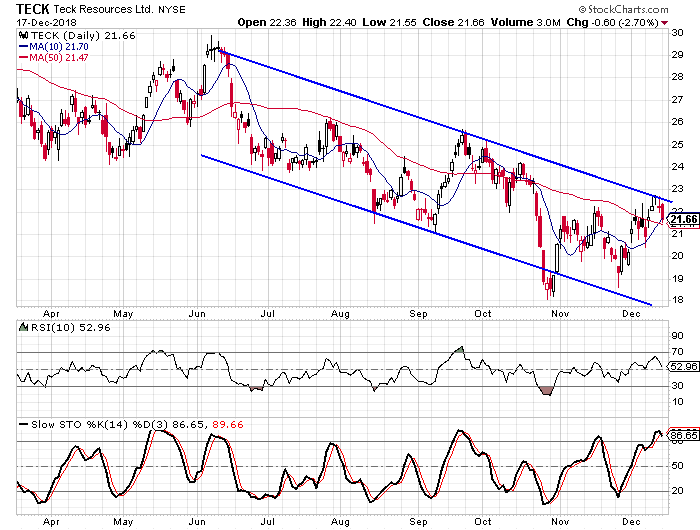 Despite the slightly above average fundamentals, the chart was too much for me to ignore. The stock has been trending lower since June and a trend channel has formed as a result. The stock just hit the upper rail of the channel and the daily stochastic readings just made a bearish crossover.