Friday saw stocks take another beating and all four indices fell sharply. The Nasdaq suffered the worst loss at 2.26% and it was joined by the Dow (-2.02%) as the two that lost over two percent. The S&P lost 1.91% on the day and the Russell dropped the least, but still lost 1.53% on the day.

All ten sectors lost ground on Friday and it was the healthcare sector that took the biggest hit at 3.37%. The tech sector lost 2.45% and the energy sector lost 2.28% and those were the only three that lost over two percent.

[hana-code-insert name=’adsense-article’ /]The utilities sector only dropped 0.19% and that was the best performance of the ten.

In all, there were four sectors that lost less than one percent.

My scans remained bullishly skewed, but the discrepancy between the two lists dropped significantly.

Of the 30 stocks on the two lists, there were only a couple that I even considered, one on the bearish list and one on the bullish list.

In the end, I felt more comfortable with the one on the bullish list and that was Louisiana Pacific (NYSE: LPX). The company has decent fundamental ratings with a 63 on the EPS rating and an A on the SMR rating. 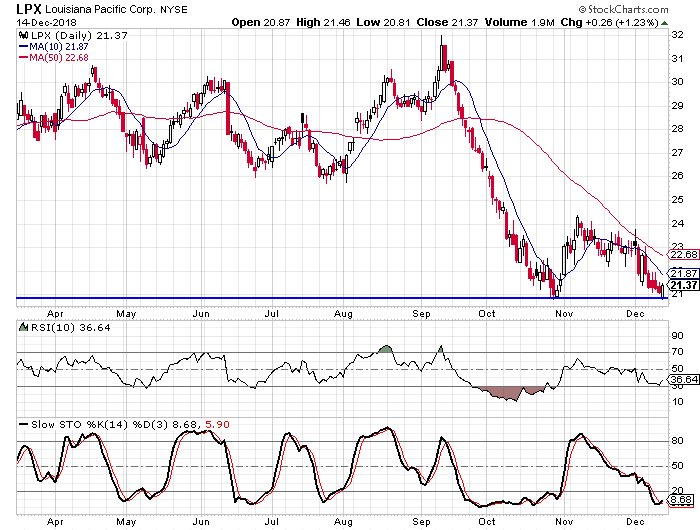 There were two things that caught my attention about Louisiana Pacific’s chart. First, the fact that it actually moved up on Friday while the rest of the market was taking a beating. The second thing that got my attention was how the stock seemed to find support in the $20.80 level on Friday just as it did in late October.

Buy to open the February $20-strike calls on LPX at $2.30 or better. These options expire on February 15. These options will double if the stock reaches $24.60. That price is just slightly above the recent high of $24.36, so I am hoping the stock can move above the November high. I suggest a target profit of 100% with a stop at $20.70.