Stocks vacillated back and forth on Thursday and the indices ended up mixed. The Dow logged a gain of 0.29% to lead the way, but it was the only one of the four in positive territory at the end of the day. The S&P notched a small loss of 0.02% and the Nasdaq closed down 0.39%. The Russell was the only index that fell sharply with a loss of 1.55%.

The sectors were evenly split on the day with five moving higher and five moving lower. The biggest move of the day was the materials sector and it fell 1.17%. The second worst performer was the financial sector with a loss of 0.73%.

[hana-code-insert name=’adsense-article’ /]The utilities sector led the way with a gain of 0.87%.

The second best performance came from the consumer staples sector with a gain of 0.64%.

My scans remained bullishly skewed last night with 50 names on the bullish list and six on the bearish side.

The barometer dropped slightly, from 86.4 to 82.5, once these results were added in to the equation.

After three straight bullish trade ideas, I have a bearish one for you today. EQT Corp. (NYSE: EQT) appeared on the bearish list and it doesn’t have terrible fundamentals, but the chart points to another leg down. The company scores a 76 on the EPS rating and a B on the SMR rating. 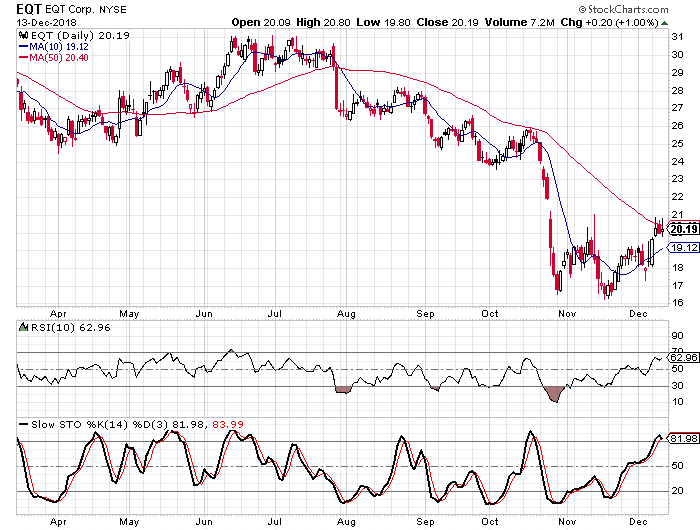 The stock is hitting resistance at its 50-day moving average. The stock hit the 50-day back in October and then dropped sharply. The stochastic readings are in overbought territory and just made a bearish crossover. This was also the setup back in October.

Buy to open the January $21-strike puts on EQT at $2.00 or better. These options expire on January 18. These options will double if the stock reaches $17 and that is above the recent low, so the stock won’t have to break through that possible support. I suggest a target gain of 100% with a stop at $21.