Stocks moved higher on Wednesday after some seemingly positive news in the trade war between the U.S. and China. All four of the main indices experienced solid gains with the Russell leading the way with a gain of 1.07%. The Nasdaq was the second best performer with a gain of 0.95% and the Dow notched a gain of 0.64%. The S&P lagged slightly but still managed a gain of 0.54%.

Eight of the 10 main sectors moved higher on the day with the two defensive sectors being the ones that lost ground. The utilities sector lost 0.63% while consumer staples lost 0.09%.

[hana-code-insert name=’adsense-article’ /]The communication services sector led the way on Wednesday with a gain of 1.17%.

The consumer discretionary sector was the only other one that gained over one percent and it logged a gain of 1.06%.

My scans came in with an unbelievable bullish skew on Wednesday night.

There were 206 bullish signals and five bearish signals.

The differential of 201 is the biggest we have seen since mid-October and is one of the 15 highest readings I have had since I started tracking the scans at the beginning of 2009.

The huge bullish skew caused the barometer to jump from 5.1 to 86.4.

Believe it or not, despite the huge number of stocks on the bullish list, I had a hard time finding a stock that I liked. There are so many charts that have rolled over, it made it difficult to find a stock with solid fundamentals and where the chart still showed an upward trend. American Express (NYSE: AXP) was one of the few that fit the bill. The company scores a 75 on the EPS rating and an A on the SMR rating. 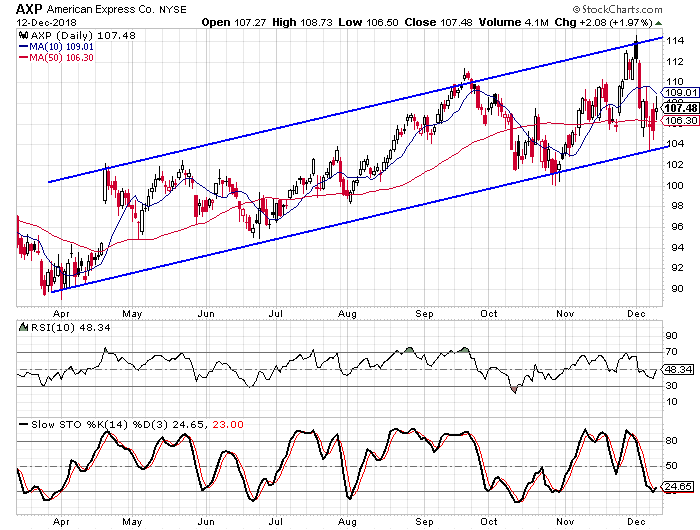 We see on the chart that an upwardly-sloped trend channel has formed going back to April. The stock just hit the lower rail of the channel and we the daily stochastic readings made a bullish crossover out of oversold territory. The chart shows a similar development at the end of October and the stock jumped from $101 to $114 in that case.

Buy to open the January $105-strike calls on AXP at $5.10 or better. These options expire on January 18. These options will double if the stock hits $115.20. That is approximately where the upper rail of the channel should be in a week or so. I suggest a target gain of 100% with a stop at $104.