Tuesday brought about the opposite action of Monday’s trading only not as extreme on either side of breakeven. Stocks opened higher and all four of the main indices were registering significant gains. By midday all four had erased their gains and were moving in to negative territory. There was a little bounce in the afternoon, but three of the four finished in negative territory.

The Nasdaq gained 0.16% as the lone winner on the day. The Dow was the worst performer with a loss of 0.22% while the Russell and S&P both suffered losses of 0.04%.

[hana-code-insert name=’adsense-article’ /]Despite the fact that three out of four indices were down, seven of the 10 main sectors finished higher on Tuesday.

Consumer staples led the way with a gain of 0.86%.

The financial sector suffered the biggest loss at 0.97% and it was joined in negative territory by the industrial sector (-0.56%) and the materials sector (-0.33%).

My scans produced a positive skew for a second straight last night.

There were 29 names on the bullish list and 12 on the bearish list. The positive reading was enough to push the barometer in to positive territory with a reading of 5.1.

Today’s trade idea is another bullish one and if you read my weekly stock article, you will recognize the name. Fiserv, Inc. (Nasdaq: FISV) was on the bullish list last night and it was also my stock pick of the week on Tuesday at Daily Trade Alert. The company scores an 89 on its EPS rating and an A in the SMR category. If you would like to see what I had to say about the company, you can read that article here. 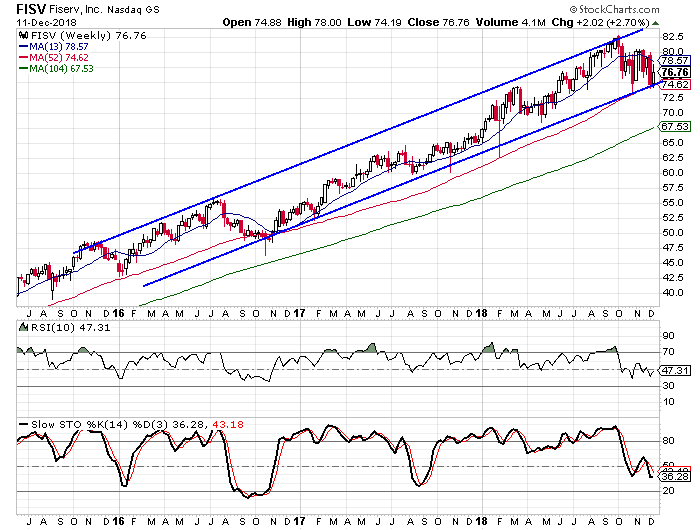 The weekly chart of the stock shows how it has trended higher within a trend channel over the last three years and how the stock is hitting the lower rail currently. It is also gathering support from its 52-week moving average.